The United Colonies of New Zion (satire but way too real)

In a joint meeting at the Pentagon (Arlington, Virginia) the President of the United States, Barack Hussein Obama, the Vice-President, Joe Biden, the Supreme Court, all Congress, the directors of the main secret services (CIA, NSA, FBI) and Wall Street Stock Market, voted unanimously in favor of abrogating the remnants of the Constitution of the United States and becoming a semi-autonomous colony of Israel, whose right to rule in America and the World was explained "because they are the Chosen People of God".

Those who wanted to oppose the move (a handful of, mostly Afroamerican, representatives of BOTH communist AND islamist ideology, and certainly antisemitic) were shot on the spot. Later a Warner Bros cartoon showed how they attempted to murder the President as they got transformed, "by the hand of God", a CNN talking head explained, into lookalikes of Willy Coyote.

Rumor is that Obama, in perfect Latin, said "Et tu Brutus..." but we have not been able to confirm this part.

Another version said that he instead said: "what a brutal massacre..." but this is also unconfirmed.

While the new national, or rather colonial, anthem is still being designed (they have difficulties with the rhymes, an anonymous source said), the new flag of the country is already known: 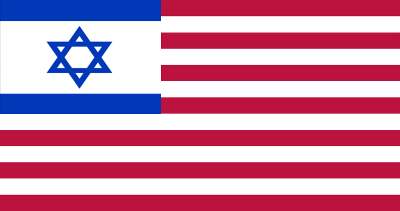 This explains the rhyme problem said a speaker of the Music Industry on condition of anonymity.

In a parallel development the Conference of Presidents of Major American Jewish Organizations, also known as the Israel Lobby, decided to recycle itself into a mercantile charter that will now bear the name of Israeli West Indies Company, taking effective control of the new colony.

From now on Barack Obama shall be addressed as Governor General of New Zion and must go in yearly pilgrimage to Jerusalem to prostrate before the rulers of the Empire. His power will be nil but he will still have to put up with all the blame, for a good salary, of course.

Nothing has really changed, said a spokesman from the White House, just that now things are more clear. The Presid... erm, the Governor General... wants honesty and sincerity to be the main pillars of his policy.

In a separate development, the Prime Minister of Canada, Stephen Harper, declared that his country is considering very seriously leaving the Commonwealth and joining the Israeli Empire as well. After all we are even more Zionists than the Americans, he said.

Other countries that are rumored to be willing to join the Israeli Empire are Egypt, which would become a protectorate, Morocco, the United Kingdom, Germany, Spain and maybe others.

Asked if Italy would follow suit, Prime Minister Silvio Berlusconi said with his trademark botox smile: we value highly the frienship of Israel, Iran and Colombia but, you know, Italy has its own mafia, what means that we are a sovereign country.

Also in Rome, Pope Benedict declared with hands raised to the sky and the same gesture of infinite patience that he always displays to the press: God writes straight with crooked lines, blessed be Him and His infinite wisdom.

In Beijing, President Hu Jintao raised an eyebrow in a most rare emotional expression while declaring: not really unexpected. We hope that the US bonds we have are convertible into shares of the new West India Company.

In Tel Aviv, Benjamin Netanyahu said: finally! Then he proceeded to declare Gaza nuclear tests zone and war on Iran, Syria, Lebanon, Eritrea, Sudan, Turkey, Venezuela and Malta. The Israely Sepoy Army of the West Indies, formerly known as the US Armed Forces is combing the country in search of healthy recruits aged 12 or older for all these new imperial wars.

The usual satirical disclaimer: any resemblance of the characters and countries of this story with any real people or country alive or dead is a mere coincidence (how could it be otherwise?)

Anticopyright: text and illustrations in this story are my creation and can be copied at will. Attribution is good manners but lack of it may protect my life from the Mossad and such, so do as you wish.

"Our race is the Master Race. We Jews are divine gods on this planet. We are as different from the inferior races as they are﻿ from insects. In fact, compared to our race, other races are beasts and animals, cattle at best. Other races are considered as human excrement. Our destiny is to rule over the inferior races. Our earthly kingdom will be ruled by our leader with a rod of iron. The masses will lick our feet and serve us as our slaves."

"our leader" hmmmm who may that be ?

"Every time we do something you tell me America will do this﻿ and will do that . . . I want to tell you something very clear: Don't worry about American pressure on Israel. We, the Jewish people, control America, and the Americans know it." - Israeli Prime Minister, Ariel Sharon, October 3, 2001

duh, the Rothchilds and associates captured America in 1913 with the passage of the federal reserve act....