So far it has been an outstanding moral victory for the side of Justice, Peace and Freedom in the conflict between the Global Civil Society and the Zionazi Enemy-Of-All: Israel's ugly truth has been unveiled (again) at a high cost and it's clear that the Zionist colonial project is morally bankrupt in the face of the World.
But this has not finished yet. The six ships that were intercepted the other night are just part of the planned Freedom Flotilla. One ship, the Rachel Corrie, of Irish flag, was delayed and is right now somewhere between Malta and Gaza, other two ships had "technical problems" (were probably sabotaged by the Zionists) and had to stay in port in Turkey.

The final decision is not yet taken but it's very possible that the Rachel Corrie with or without the other ships will head to Gaza in the following days. 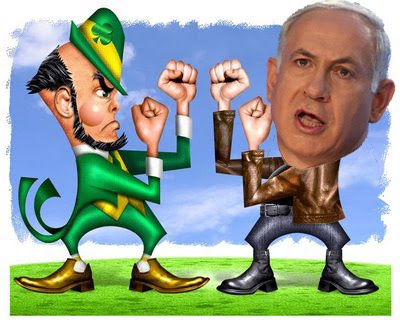 Cartoon from Irish4Palestine:
'Hey Israel... guess what? We're coming!'
Among the people aboard this ship is Peace Nobel laureate Máiread Corrigan-Maguire, wrongly reported earlier among those attacked by Israel, who is one of the promoters of Free Gaza.

The departure of the Rachel Corrie has been announced in various blogs and news sites but so far I had not really emphasized it because it lacked clear confirmation. According to Window into Palestine the final decision has not yet been taken but the ship has clearly departed from Malta already.

In any case, Greta Berlin, a speaker for the Free Gaza project declared:

We are an initiative to break Israel’s blockade of 1.5 million people in Gaza. Our mission has not changed and this is not going to be the last flotilla.

Here follows a nice video-report on what is the Rachel Corrie vessel and what aid is carrying to Gaza:

In other developments, it seems that Israel is set to deport as quick as possible all kidnapped activists. Though there are also news that some of the Palestinian ones are being subject to trial.

Also Basque newspaper Gara has this beautiful image of Gazans throwing carnations to the Mediterranean in homage to the victims of Israel's madness:

I saw a video, from Al Jazeera(for whatever that's worth, of IDF forces emerging from helicopters and slithering down ropes to the deck of the other ship where violence broke out yesterday. It was hard to tell what happened after they landed, but it looked to me like the moment they landed on deck, they started beating people up. This, before they towed the ship to Ashdod and planned to deport everybody. My bottom line on all this? The Israeli government is getting more and more absurd, and getting farther and farther away from the lofty goals of some of its founders. They should be peacefully resisted, so I hope these ships keep coming and get their supplies to the Gazans. The people of Gaza have suffered enough, mostly at Israeli hands.
Anne G

One of my friends suggests this will be more significant. Journalists will be watching more closely. I hope he's right. But, what did I tell you? Nothing is altered. Israel behaves in exactly the same way it always has. No wonder anti-semitism (so-called) exists. Many may be wondering if Hitler had the right idea after all.

I understand that using terms as "anti-semitism" (itself a very confusing term because Arabs are Semites, what makes Arab haters, many of them Zionist Jews, anti-semites themselves) to mean anti-Zionism is totally misplaced. I really never use that term, except in defensive mode if I am accused of being "anti-semitic", what has happened sometimes (though very few) to my astonishment.

In fact Jews today are not any persecuted minority anywhere but rather a privileged one, so talking of anti-semitism is just talking shit for the sake of it.

Of course there are some groups that are anti-semitic in the broad sense (they hate Arabs and Jews alike) but these are just racist groups. A totally different animal of what Zionists mean by "anti-semitic": someone who dares to criticize or confront Zionism, the state of Israel or the Zionist Lobby (= Jewish Mafia).

There's some people also who mixes the term Jewish and Zionist but that's normal considering how most Jews are Zionists and Zionists are dominated by an ethnic network of Jewish nature.

Bringing Hitler to the discussion is similar to bring anti-semitism. After all all those historical events happened in the remote past, long before any of us were born. It's like discussing Napoleon, Stalin or the bombing of Hiroshima: they are part of history but they are not the present and what we are interested in is the present and the future.

Also I was recalling earlier in relation with these events how the Jewish population of Palestine grew from c. 10% to c. 33% in just a few years "thanks" to Hitler, allowing (though not justifying) the creation of a Jewish state in Palestine. Hitler was instrumental in scaring Jews, who mostly identified back then with their various real nations (Germany, France, Poland, USSR...) than as specifically Jewish, and who disdained Zionist as utopic and unfeasible, and inducing them to migrate to Palestine (as well as to other countries like the USA).

It is a known fact that Zionist organizations did collaborate with the Nazis, specially at the beginning, because both sides benefited: the Nazis got rid of Jews and Zionists got Jewish immigrants for their colonial project.

In some aspects at least, it can well be said that Israel is the bastard son of Hitler. And certainly, being an Ashkenazi (Central European) project, it was largely embedded of German nationalist concepts, more based on blood than language, territory or self-identification, such as the ones that fed Hitler's racist fascism. So it's not that we can say that Israel is not related to Nazi Germany, in fact it's probably its creation to a large extent (though France and, specially, the UK helped a lot).