Again the Zionist massacre of maybe as many as 29 civilians (Galloway's figure, Israel says 10) aboard the Free Gaza flotilla is what I'm going to deal with. I have discussed it and tried to cover the most important developments

First of all it is intolerable that we still don't know for sure the casualty figures and their names.

Some of the prisoners are already returning to their homes but most remain under Israeli detention. Israel has declared, revoking previous statements that they would be judged there (on what charges: interception of Zionist bullets with their bodies?), that they will be offered the choice to identify themselves and be returned home or to remain in Israel as political prisoners.

I imagine that some of the approximately 130 Palestinians in the ships will chose the second option. Because in the videos before departure they were so extremely eager to return to their homeland in spite of all the oppression!

The declarations of some of the returning pacifists can be read at Reuters' AlertNet:

We did not resist at all, we couldn't even if we had wanted to. What could we have done against the commandos who climbed aboard? The only thing some people tried was to delay them from getting to the bridge, forming a human shield. They were fired upon with plastic bullets and were stunned with electric devices.

There was great mistreatment after our arrest. We were essentially hostages, like animals on the ground.

They wouldn't let us use the bathroom, wouldn't give us food or water and they took video of us despite international conventions banning this.


The captain of the vessel Mavi Marmara told us 'They are firing randomly, they are breaking the windows and entering inside. So you should get out of here as soon as possible.' That was our last conversation with him.


There are others but the only direct witness mentioned of what happened at the Mavi Marmara seems to be German MP Norman Paech (Die Linke):


Other news taken from Al Jazeera's live coverage are:


British PM David Cameron calls for a lift of the blockade of Gaza.


King Abdullah from Jordan has offered to take those prisoners who are citizens of countries that have no relations with Israel.


A rather unusual development are the mass protests in Tel Aviv (see video from Israel Social TV - in Hebrew). It's difficult to evaluate the numbers because there are not panoramic images but I'd say that thousands [confirmed: Israeli Ma'an agency says that 2000, as reported by Gaza Solidarity]. 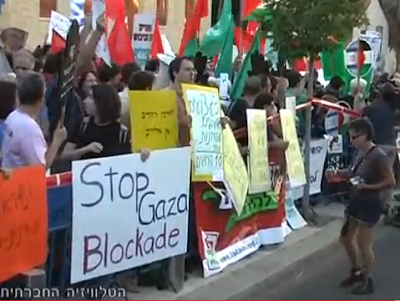 The President of Finland declared:

We have condemned it very strongly. The first thing of course is the situation in Gaza. Isolation is not a constructive way for negotiations. So the people in Gaza should be treated in a human way. They have suffered quite too much. The second part is that, these ships of solidarity have been one effort by the NGO side, and the answer of [the] military is totally impossible to understand.

I think that the leaders of Israel have now seen not only different countries; the EU, and the UN Security Council have strongly condemned the violence, and have been very decisive to say that it has to be stopped, both the blockade and the other violence.


Turkish Prime Minister, Tayyip Erdogan, demanded that Israel shares information about the condition of the activists from the flotilla.

Erdogan's discourse at least once emphasized the historical ties of friendship and cooperation with Israel. However he also addressed the Israeli nation in this manner:

We have always contributed to the attempts of Israeli people to maintain peace and stability. Now it is their turn. Your government's aggressive attitudes, like robbers, like pirates, this is damaging your country's respect in the international arena.

Part of his discourse was also critical with the USA, implicitly blaming them for Israeli's arrogance and reckless attitude.

More details of Erdogan's discourse can be read here.


Hamas denounced the UN Security Council declaration as weak and unbalanced. They also made a call for Palestinian unity.


Egyptian President Hosni Mubarak declared that it is opening the Rafah crossing for medical and humanitarian cases however he did not state for how long (in previous occasions it has only lasted a few days). Later information from Al Fatah (the so-called Palestinian Authority but that title would correspond to Hamas if anyone, as they won the last elections) said that there are no restrictions on who can cross through Rafah.


Al Jazeera cameraman Isaam Zaatar, on board of one of the ships, denounced violence from the Zionist troops:

I was filming, he [an Israeli solider] ran after me with an electric stick [stun gun]. He could not catch me. One of his colleagues hit my hand from behind with a stick [stun gun]. My camera fell down. He ran to crush the camera with his feet. I told him, don’t break my camera. If you want the tapes, I will give them to you. I told him these are media equipment. They had no limits. They used rubber bullets. They used tear bombs. It was an unbelievable scene.

He also informed that many of the arrested are being forced by the Zionist military to sing false documents declaring that they had broken the law.


The European Union and Russia issued a strong joint statement condemning the use of violence and calling for the blockade of Gaza to be lifted. In my opinion, this rare joint declaration shows how the lack of a strong stand from Washington on Israeli crimes is altering the geopolitics of West Eurasia and weakening NATO.


Global civil movement Avaaz (Voice in Arabic) has an online petition that states:

We call for an immediate, independent investigation into the flotilla assault, full accountability for those responsible, and the lifting of the Gaza blockade.

In few hours it has achieved almost 70,000 signatures. You can add yours here.


Another such petition by US-based Freedom Forward can be found here.


Arab League Secretary General, Amr Moussa, declared that action will be decided tomorrow and that the action will be taken against Israel "on legal, political and economic levels".


The Israeli Military seems to insist that the death toll is of 10. We'll see.


Demonstrations across the World against the massacre continue and are likely to go on through the weekend at least.

Israel is gradually turning from an asset to the United States to a burden.

Dagan also said that the U.S. government has recently examined the possibility of coercing a settlement on Israel and the Palestinians, but retreated from the idea after realizing it would not lead to a peace agreement.


The same site also mentions that Israeli-Arab leaders have called a general strike in protest for the murderous attack on the flotilla. They also called on world governments to put Israeli PM Benjamin Netanyahu on trial and called for a number of demonstrations.


Past coverage of the massacre and related events in this blog here and here.

I don't know why Israel keeps committing these stupidities. Well, I do, in a way. Because they know they can get away with it. But I do know what probably should be done about it -- there should be a worldwide boycott of Israel. Perhaps if the help they get -- particularly from the US -- might pinch them enough so that they might start thinking about the probable consequences of such dangerously stupid acts.

Not sure which exactly of the "founding fathers" of Israel said it but the message is clear: "don't care about what the Goyim say but about what the Jews do".

It's an arrogant racist, supremacist attitude that is essentially immoral and disdainful of the humanity of the others. In the end it's the same as the Nazis, change this or that.

The key to the solution is probably in the USA but this country would have to radically change its attitude of unconditional support of Israel and for that it first needs to get rid of its largely Jewish and almost wholly Zionist economic elite. So I don't expect such change before there is a Socialist revolution in the USA.

Because at the end of the day, when Israel executes such crimes it knows that it controls the USA and that the US leaders will do nothing, absolutely nothing to stop them (and most likely will rush in their help if they get in real trouble like a war with Turkey or whatever).

In fact, the USA sends billions of military aid to Israel, which is and has been for long the main recipient of US foreign aid (second or third is Egypt and that's why they are so boot-licking towards Israel), has laws that even forbid private boycott to Israel (exactly the same they have laws that force boycott to Cuba) and went to war with Iraq just to defer a highly potential threat to Israel.

The USA is ruining itself to please its Zionist masters and that's really a pity.

The other possibility of solution, if the US people does not change things over there by some sort of revolutionary means, recovering their dignity as sovereign nation, would be that the USA really sinks as global superpower, what is already happening but will take still some time to consolidate. Without the effective support of "the virtual motherland", as Joachim Martillo calls it, Israel is simply doomed, no matter how many nukes it has.

Probably in some decades we will look at Israel as a historical abhorrence, an anachronistic crusader state, the last European population colony and the failed dream of an ethnicity/religious sect that went mad and became exactly the same as the ones who persecuted them earlier.

It will be also studied as example of the intermingling of Capitalism and ethnic mafias, along with the N'drangheta and other such criminal organizations.

I don't know. I know it's a failed state that will eventually collapse but these monsters tend to die killing, just like the Nazis, so I also expect even worse crimes to be committed by them in the near future.

The people of good will, those who believe in dignity, justice, freedom, human rights... must oppose them