A brief review of the latest events re. the Zionist attack against the Freedom Flotilla and new initiatives.

Window into Palestine reports that 17 peace activists who were aboard the Mavi Marmara are still unaccounted for and feared dead.

According to this source, Israeli troops threw four injured people to the sea and shot at blank point the man who raised the white flag indicating surrender and several people who were already hadcuffed.

This tells me that the lack of any sort of reaction by other countries may have co-adjuvated to some of the deads. Because most aboard the ship weared life jackets, so if a rescue mission would have been sent, they had a chance of finding those thrown by Israel to the sea still alive.

More raw footage has emerged, along with photos and declarations, clarifying the events at the Mavi Marmara. You can watch the video of some of the hottest moments of the Zionist aggression and pictures of the two Israeli soldiers neutralized in apparent self-defense actions by the people on the ship, and then taken care of by the very same people, at Ali Abuminah's blog.

Then you can read to Ken O'Keefe's first person account of the events aboard the Mavi Marmara and then in Israeli military prisons, where he was tortured, at Window into Palestine. An important read to understand about nonviolence and self-defence, including quotes from Ghandi. 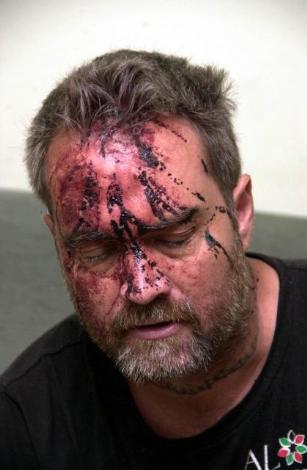 O'Keefe. Injuries courtesy of Israeli torturers
Al Jazeera's Jamal Eishayyal, a UK citizen, also has a first person account of the events aboard the Mavi Marmara and how the British government totally ignored him.


Jewish ship to be sent to Gaza with aid

Jewish activists have decided to join the actions against the blockade of Gaza by fleeting their own aid ship to break the blockade, reports Justice.

There is also an interesting article by Christopher King at Window into Palestine denying the legitimacy of Israel to exist on light of international law and historical SdN/UN resolutions. The key issue being the rights of the natives of Palestine, logically.

The local newspaper tonight claims the Turky's state forensics laboratory says the nine activists had been shot 30 times. Seems unlikely they were shot simply in self defense. The paper also claims New Zealander Geoffry Plamer has been proposed by the UN to lead an enquiry. But I'm sure the Israelis will not agree to an independent enquiry.

I already commented on Turkey's autopsies on Saturday, though I emphasized two individual cases and left the rest to be read at the original source, which in this case was Al Jazeera.

I agree that Israel is most unlikely to agree to any sort of independent enquiry. They have not even returned all the materials they robbed at the high seas, including the ships, the humanitarian aid, the passports of the kidnapped, their money, their personal possessions. It's a clear act of piracy.

They know they can do whatever they want that their men and women at Washington will back them unconditionally and sign the regular billionaire check on account of US taxpayers for them to buy more and more weapons with which terrorize Palestinians, Lebanese and whoever else they decide.

It's totally unbelievable the impunity of this rogue terrorist genocidal entity and the credulity of so many people, specially (but not only) in The States.

I'm sure you know about this, from our local TV news. But if you haven't already seen it, I'm sure it will make you even more angry.

I almost don't watch TV but I just read and then watched at BBC.

Obviously I think it is totally unfair to dismiss that lady for saying what many of us think, more or less (many Jewish Palestinians were born in Palestine or have been living there for very long - what makes for an important caveat but not a substantial one).

However the Palestinian offer is far more generous and realist: let's make a single secular Palestinian state for all. They are even willing to accept the green line as temporary cool off border (temporary meaning a century if need be) but they demand equality, democracy, effective human rights for all and the right of return of those displaced by the Zionist colonial project.