Inbreeding and fitness in mysid shrimps

There is an interesting new paper on a subject that often drives much discussion in this blog at least: how bad is inbreeding. The answer of course depends on several issues such as the intensity of inbreeding (not a mere true/false dichotomy) and the environmental pressure.

This paper deals with these matters in an experimental set with Americamysis bahia, a species of mysid shrimps.

The authors created a number of extremely inbred populations by

1. Taking a single pregnant female (presumably impregnated by a single male, as is typical in this species) from the main population (AMX) and removing it when the brood was released

2. Taking then one impregnated female from one of the resulting populations and another from a different one and placing them in the same tank until the brood was released.

3. Taking then one single impregnated female from the population resulting from step 2.

Overall it means that the hyper-inbred brood at the start of the experiment, described as 1X, had went through a narrow 2-4-2 bottleneck, being the equivalent to having 2.4 founders.

Populations of the type 2X, 6X and 8X were generated by mixing the respective number of 1X inbred populations, so they represent lesser degrees of inbreeding each.

By the end of the experiment, after 40 weeks, these were some of the results (more tables, graphs and explanations in the paper): 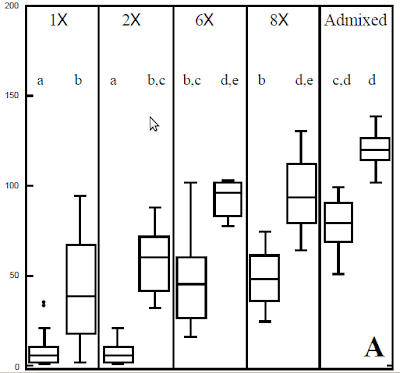 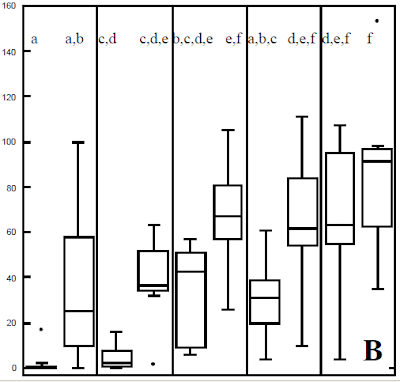 While the results should not be strictly extrapolable to other species, we can reasonably conclude that a very low number of effective population founders (5 or so) seriously hampers survivability, specially in challenging environments, where essentially means a death sentence. However a not so tiny number of founders (25-30) can do quite well, in particular if the environment is favorable.

"we can reasonably conclude that a very low number of effective population founders (5 or so) seriously hampers survivability, specially in challenging environments, where essentially means a death sentence. However a not so tiny number of founders (25-30) can do quite well, in particular if the environment is favorable".

But for how long? The experiment was only for a few generations. What about the long term survival? Particularly if the environment ceases to be so 'favorable'. It's long tern survival that is the ultimate problem for minor levels of inbreeding, unless the inbred group is released into particularly favourable environments, as has happened at times with rabbits, for example. It's generally claimed that an introduced population of less than 100 fails to survive (as demonstrated by European introductions to New Zealand), and long term survival relies on a permanent population of at least 500.

As you say the experiment ok only lasted for a limited time but diversity should tend to increase with time because of mutation and recombination, so it's clear, I think, that the conditions can can't worsen.

Also the 6x and 8x populations managed to have survival rates in all conditions similar to those of naturally admixed mysids (slightly lower but not significantly so), so I understand that they are pretty good at surviving.

Not "perfect" but statistically not different from "perfect".

"What about the long term survival?"

You can try doing the experiment yourself for the next 10 or 40 years, you only need some aquariums and shrimp and much dedication.

"It's generally claimed that an introduced population of less than 100 fails to survive".

In Wikipedia this claim would quickly get the markers "[by whom?]" and "[source?]".

My memory only reaches to one such claim and was of the order of 5 or maybe 15 individuals (discussed at AVRI in a debate we both took part in, you should remember too). 15 makes sense with this data while 5 seems too low but can still allow for survival in favorable conditions with the help of a little luck.

"... long term survival relies on a permanent population of at least 500".

This I'm more likely to believe in. However it's very possible that larger animals have reduced demands because in their evolutionary history they must have gone through many bottleneck instances that have favored those lineages sturdier against inbreeding. Instead smaller animals who exist in far larger figures probably not or not so often.

It's very likely in any case that the figures vary depending on the species, size and evolutionary history. You know: Cleopatra was the descendant of many many generations of institutional incest and she was still bright and fertile, with the only disease affecting her family was the dreaded "mysterious circumstances", also known as political murder. However she was not as pretty as Hollywood made her be.