Haitians protest against occupation. One shot while police just looks


Batay Ouvriye (Workers' Struggle in Kreyòl) reports from Haiti, via La Haine[es], of the demonstration against the occupation on July 28th, called by them and other organizations. Simultaneously NGOs from the USA and Brazil protested in New York, Brasilia, Sao Paulo and Rio de Janeiro. 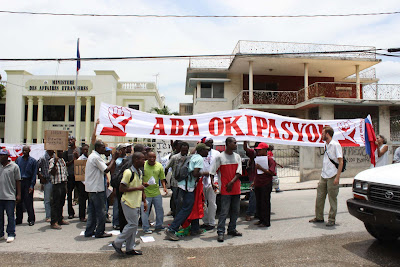 The demonstration, which consisted on some 100 activists, split in three groups: a picket before the Ministry of Foreign Affairs, another picket blocking traffic and yet another dedicated to information via pamphlets and graffiti. 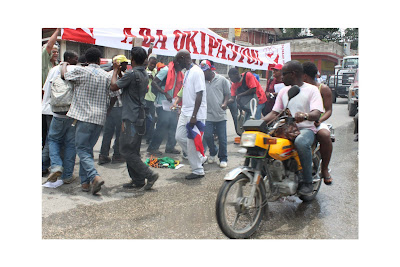 The demo culminated with the burning of a Brazilian flag which enveloped a US banner (photo above).

When the demo was ending, a government paramilitary arrived and shot one of the demonstrators without the police doing anything about it.

Another demo of Batay Ouvriye with some 150 participants and similar slogans went through Cap Haitïen.

Haiti has been under "international" occupation since 2004, when a joint US-French operation kidnapped the legal and highly popular President Bertrand Aristide, of socialist tendency, and deported him to Africa. In 2010, a mysterious and devastating earthquake destroyed the capital precisely when the US Navy was making a drill for an invasion of Haiti in case of a natural disaster (what a coincidence!). Immediately the USA sent a whole army to re-occupy the country in what was possibly a maneuver to displace Brazil from the area (related to the protectorate treaty with Colombia, the coup in Honduras and the more recent de facto occupation of Costa Rica).

The popular Fanmi Lavalas party of the legitimate President Aristide has been illegal ever since the 2004 invasion, what has caused widespread abstention in elections and a total delegitimization of the current puppet government of René Preval.