Researchers led by A. Sánchez-Lavega (UPV-EHU, doi:10.1029/2008GL033817) have been measuring the winds of Venus in the context of the Venus Express ESA mission to this planet. They have found that the winds decrease from ultra-fast hurricanes at the outer atmosphere (370 km/h) to somewhat less violent ones (180 km/h) at the median layers and even to total calm at the poles, where they form a vortex.

The ultra-fast winds of the higher Venusian atmosphere actually create what is called the superrotation of Venus: that gaseous part of the planet spins a lot faster (4 earthly days) than the planet itself (that takes 243 earthly days to make a Venusian day - and not 224, as the press release confusely mentions, which is the Venusian year actually). But what this research highlights is that the atmospheric superrotation is not uniform: that there are variations, still ill-understood. 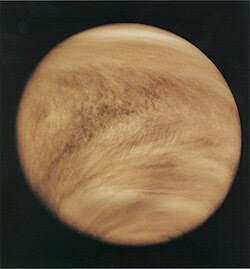