POLISARIO Front warns that if Aminatu Haidar dies, the truce is over

Aminatu Haidar is a Sahrawi citizen and human rights activist who was expelled from the territory occupied by Morocco to Canary Islands (Spain) after she wrote down in her police file that her country of residence is Sahara (meaning West Sahara or the Sahrawi Arab Democratic Republic, as is officially recognized by many countries).

Since then she has mantained a hunger strike for more than 20 days and her life now is at increased risk. However she refuses to be hospitalized on fear of Spanish manipulations or forced feeding. She has also rejected the offer of political assylum by Spain and demands to be returned to Moroccan-administered territory.

I have several times thought of covering the matter but, with so many things going on, I have failed to do it until now. 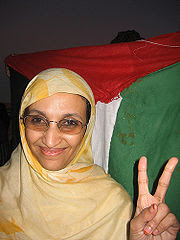 Aminatu Haidar is known as the Sahrawi Gandhi
Anyhow, the case is that the POLISARIO Front (acronym of Frente POpular para la LIberación de SAguía el Hamra y RÍO de Oro, names of the former Spanish provinces in West Sahara) has declared that if Aminatu Haidar dies, they will abandon their long standing UN-sponsored truce, that has given no results besides diplomatic blah-blah, and return to armed struggle. It was none less that Taleb Omar, leader of the Front and Prime Minister of the disputed Republic who made this warning to the Spanish state news station RNE, so it is something that must be taken very very seriously.

Oddly enough, Taleb Omar demands that the Law of Foreigners is strictly applied in this case, which would result in Haidar being expelled to Morocco immediatly (and Morocco would have to accept her because of the bilateral treaties on this matter). He had very rough words for Spain, which is accused again of being accomplice of the Moroccan tyranny (also a privileged ally of the USA and France) and compared disfavorably the role of Spain in the Sahrawi case with that of Portugal in the similar case of East Timor, where the former metropolis had a proactive commitment to the independence of its ex-colony.

frankly, no one is taking the POLISARIO front threats seriously.
It is Algeria and Only Algeria can decide the course of action in the zone of conflict.

I'm not so sure but so far Algeria has supported the POLISARIO Front, even if only just to annoy Morocco, that still claims large chunks of Algerian territory.

Whatever the case, the Moroccan regime has put itself in evidence and into diplomatic trouble. Haidar was much less known outside (and possibly inside too) before Morocco deported her.

"I'm not so sure but so far Algeria has supported the POLISARIO Front, even if only just to annoy Morocco, that still claims large chunks of Algerian territory."

I believe you are correct on Algeria's true motives.
at the moment I don't see Algeria is motivated in escalating the conflict with morocco, I suspect they are somehow content with the current status quo.
cheers