Thanks to a very friendly reader I have got now access to a large host of papers I would not probably have access to otherwise. One of them is S. Shennan & K. Edinborough, Prehistoric population history: from the Late Glacial to the Late Neolithic in Central and Northern Europe (Journal of Archaeological Science, 2007).
It is a very interesting research that links almost directly with what I wrote these last days on British Neolithic. Like in Collard's paper, they make use of archaeological density and C14 dates to build up an approximate reconstruction of the demographic history of Germany, Poland and Denmark in the Epipaleolithic and Neolithic periods.

I took this graph (fig. 2) and annotated it with references to the various cultures in order to get an improved vision, to make the comparisons more extensive, I also added Collard's graph for Britain (notice that Collard uses calBP, i.e. "years ago", while Shennan and Edinborough use BCE dates). The result is as follows (click to expand): 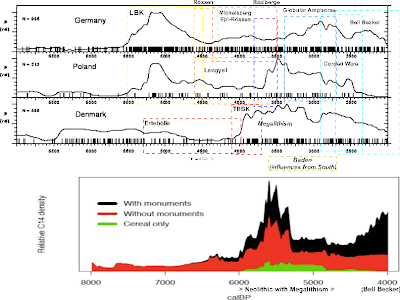 I used a color key: yellow-orange for Danubian cultures, red for Nordic cultures and blue for Kurgan cultures. All marked cultures are Neolithic (or Chalcolithic). The reference dates have been taken as carefully as possible from The Comparative Archaeology Web (a great site) and Wikipedia.

My reader called my attention on the presence of a sharp peak similar to that found in Britain for Central European early Neolithic. There are some differences and they belong to very different periods (separated by almost 2000 years) but there is certainly a marked similitude (they are also similar in that they are both the first local farming cultures and that they both seem to be originated in migrations, although within very different cultural frames). I was suggested that maybe an epidemic caused it but I find that mass destruction epidemics like the Black Death are not known to destroy more than half the population and are certainly followed by a demic recovery soon afterwards. Also I'm too materialist to think than anything but economic reasons would have caused such abrupt decline.

What economic reasons? Of course, there might be climatic reasons: an increase in cold would surely cause a sharp decline but notice that, while continental farmers seem to have all suffered more or less sharp decline since 5000 CE, British hunter-gatherers seem mostly unaffected. In turn, the British Neolithic demic collapse has some less dramatic parallels in the continent (except Germany) but they are much less destructive. I would not totally discard hence that epidemics or cold periods might have helped in these Early Neolithic decays but there must be something else.

The key in this phenomenon (assuming it is no artifact) seems to be the fact that they are both immigrant cultures and the first Neolithic phenomenon locally. So I am considering that their practices were not sustainable and that in few centuries they may have destroyed the very ecological foundations of their initially buoyant economy. Slash-and-burn farming can be the key to a rapid success but also to a slower destruction of the environment that unavoidably has consequences in the long run. The fact that they were immigrant peoples, with imported crops and techniques, and largely ignorant initially of the local ecology, can only have helped to this lack of perspective and their eventual (partial) failure.

A partial exception in this picture is Denmark: this country appears, ironically, to have been more populated in the Epipaleolithic (fishing-based economy, which is quite productive) than in all the Neolithic prior to Funnelbeaker (TRBK) and Megalithism. There is nevertheless a decline around the same period as happened in Central Europe, but is not nearly as sharp.

There are more interesting analysis to develop from this graph.

One is that the bottom of Germany's Neolithic population reached apparently a lowest point (not significantly higher than in the Late Epipaleolithic) with Rössen culture (Danubian regional development) and did not really recover until deep in the Chalcolithic in the Globular Amporae to Corded Ware transition, at the beginning of idoeuropeization (except for East Germany, which is much older - Baalberge). However Germany is large and was fragmented in many regional groups (some within TRBK too, not marked for this country), specially as time passed, so take this with some caution if you want take a more local perspective.

Quite similar is the case for Poland, though the recovery arrived earlier, again coincident more or less with Indeuropeization. But notice that the recovery belongs rather to the early Baden culture period (marked outside the graph in dark yellow), which barely reached Poland as such but did influence these early West Indoeuropeans into a process of some cultural "Danubization", which seems was beneficial.

But Denmark is the area that experienced an earliest and more sustained recovery with Funelbeaker culture and Megalithism. There is some decline by the end of this period (why?) and then a recovery with the Corded Ware (Indoeuropeization), which could well mean a colonization.

In all Indoeuropeanized areas (Central Europe, Denmark) there is a sustained decline after Corded Ware, that largely correlates with the complex Bell Beaker phenomenon (that I interpret as a trade network or multinational guild - it is not a true culture in any case but in most places a minority phenomenon).

However this is not the case in Britain, where this period corresponds to either a demographic plateau (without monuments) or a period of marked growth (with monuments). It is certainly a golden age for the Atlantic peoples (pre-Indoeuropean) for what I know of other contexts, when the first West European civilzations rise in Iberia, one of them even becoming temporarily the main center of the Bell Beaker trade network, and when mariner trade across the Atlantic (and Mediterranean) seems to be very high. It is therefore likely that the demographic decline of Indoeuropeans has no parallel but rather an opposite in the pre-Indoeuropean Atlantic cultural area, still Megalithic for a long time.


Update (Dec 10): take a look at this climate reconstruction graph:

(from Wikimedia Commons)
It would seem maybe that some of the more marked demic peaks could be coincident with some similar peaks in the average temperatures. Notably there was one after 6000 BP, coincident with the farmers' colonization of Britain and the great increase of population in Denmark, and another one at 8000 BP, coincident with the Danubian expansion. But otherwise the parallels are hard to find, so I still think that climatic fluctuations were only a co-factor and not the main driver of demographics.

There is a relevant climatological point. Here's what I say about it in Peopling of Europe:

"Farming arrived late in northern Europe. Farmers seem to have been daunted by the northerly climate. For over a millennium they halted on the North European Plain. Then climate change made farming feasible further north around 4,000 BC. Paradoxically this was an era of global cooling. At such times the prevailing winds shift from latitudinal (east and west) to meridional (north and south). Southerly winds brought drier conditions and warmer summers to the British Isles and south-western Scandinavia, areas temperate for their latitude due to the North Atlantic Drift. Farmers spread swiftly into and across the British Isles. The Funnel Beaker Culture that arose in Scandinavia and the Baltic Sea basin at the same time falls technologically into the Copper Age. Even then it only penetrated southern Scandinavia."

Thanks, I really like the graph too. I needed something like those notes to see the patterns more clearly.

The marks are not too precise anyhow, for instance TRBK (Funnelbeaker) also extended into parts of Germany and Poland but I did not have room for it nor was sure of the exact dates where it does happen, so I skipped it. I also understand that TRBK extends for all the Megalithic period in Denmark and South Sweden but my source did not confirm that.

You probably have a point re. climatic influences. In this I make two observations:

First, not only cold but maybe also the humidity of Atlantic climate could have hindered Neolithic advance. Only three Atlantic regions are exceptional in this:

2. Denmark (and nearby areas), though as we can see here with very little increase in population. It was a rather "developed" region already in the Epipaleolithic and had Danubians just "across the border".

A further region was maybe along the Garonne in Southern France, also climatically "intermediate" between Atlantic and Mediterranean climates maybe, but it's rather diffuse and confusing.

Second, I'm looking at this climate graph and I have the impression that the more marked demic peaks may be coincident with some climatic peaks too. However the overall climate of that period was rather warm ("climate optimum", near or above modern temperatures).

Sure (per above: Atlantic climate in most of it). Just that the Basque Country historically is at least as much related to SW France (Gascony, Aquitaine) than to Spain, probably more. Ancient Aquitanians spoke Basque and Gascons today are still the ethnos that is closest to Basques genetically, even if they speak Romance now. Parts of the modern Basque Country are also under the administration of France. Just that for geography and historical reasons