The demographics of British Neolithic (2)

I wrote yesterday on the new research by Collard et al. that suggests that Britain experimented a rapid population increase in the few centuries that followed the arrival of farming to the island. Afterwards a reader has sent me a copy of the paper (a million thanks again) and I can now comment a bit further with better knowledge of the matter.

But first of all the sequence:

This graph, which is central to the research, represents the archaeological findings with a C14 date for the whole island of Great Britain (I understand). As you can see the population explodes after c. 6000 calBP (calibrated C14 dates, our best equivalent to "years ago" since 1950 - equivalent to c. 3950 BCE in this case), even if we discard the monuments. The demic growth was some 400% in four centuries, maybe more.

As the authors argue this explosion is difficult to conciliate with a process of gradual incorporation of farming by the natives and fits best with the model of colonization from the mainland.

Most of the Neolithic colonization (or demic explosion) process happened in two specific areas: SW England and central Scotland. The rest of the island was unaffected or only affected in a secondary and less intense manner. Naturally (climate) SW England experienced a much more intense demic explosion than Scotland, which began slightly before and ended also somewhat later.

This is the situation at the apogee of SW English Neolithic, 5600-5700 calBP ("hotter" colors like white imply greater density, black implies same density as in Epipaleolithic): 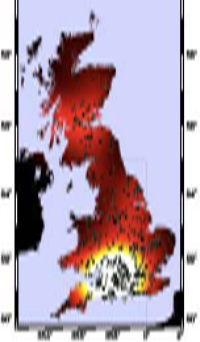 The Scottish Neolithic apogee was apparently some 100 years early and here is shown already receding (but was not much more extense nor intense anyhow).

The authors argue that the migrations were two, both originated in NW France but in different subregions.

The first wave was that affecting SW England and seems to have originated in the Megalithic area of Lower Normandy, with some elements also from the (non-Megalithic) Neolithic of Nord-Pas-de-Calais.

One hundred years later more or less, a second wave original from Brittany (also within the Dolmenic Megalithism cultural area) touched in coastal Wales and reached Scotland. There are no traces of any other migration.

Both Lower Normandy and Brittany, as well as the inland areas between the Seine and the Loire rivers, were a homogeneous cultural region that is only second in Europe to develop the Dolmenic Megalithic cultural set (earliest known are in Southern Portugal and nearby districts of Spain, soon after Neolithization, c. 7000 BP). In Celtic and Roman times it was known as Armorica, meaning the Sea Country, as a whole it has no other collective name so guess that talking of Armorican Neolithic or Armorican Megalithism makes full sense.

This ancient country would be in any case the main source of the Neolithic colonists that this paper suggests.

Why did the population decline so sharply after the initial explosion? Did they over-exploit their environment? Is the initial abrupt growth an artifact of archaeological research?

If the arrival of Neolithic to Great Britain (and NW Iberia at least) is product of the spread of Dolmenic Megalithism, does this imply that we should begin to consider Megalithic expansion as a demic phenomenon in general, with all the implications it would have in population genetics? I find this hard to believe but I am not totally sure. If so, should we consider Portugal as the origin?

What happened in the "black" (or even dark red) areas that are about half of the island? It does not look like there was any colonization there. How did they become Megalithic then?

Why did the people of Great Britain began building so many monuments since 2500 BCE? This is precisely a very hot period in Europe, when Indoeuropeans (Kurgan) took over West Germany and Scandinavia, but also just after the formation of the first West European civilizations in southern Iberia (VNSP and Los Millares) and not long before the increase in trade associated to the Bell-Beaker phenomenon. Does all this imply some sort of increase in political organization?

"If the arrival of Neolithic to Great Britain (and NW Iberia at least) is product of the spread of Dolmenic Megalithism, does this imply that we should begin to consider Megalithic expansion as a demic phenomenon in general, with all the implications it would have in population genetics?"

As I am sure you are aware, from a population genetics perspective, the British are closer to the Iberians than to inland Europeans, and Y-DNA types like R1b show unity in the coastal Atlantic area.

"Why did the people of Great Britain began building so many monuments since 2500 BCE? This is precisely a very hot period in Europe, when Indoeuropeans (Kurgan) took over West Germany and Scandinavia, but also just after the formation of the first West European civilizations in southern Iberia (VNSP and Los Millares) and not long before the increase in trade associated to the Bell-Beaker phenomenon."

I think that the Kurgan hypothesis is wrong on this point. The evidence seems much stronger for the Urnfield culture which begins to spread at the eve of Bronze Age collapse being the first Indo-European culture in Europe (i.e. 1300 BCE and later). The drought and mayhem of Bronze Age collapse led to historically and archeologically documented migrations from the Aegean by the Phoenicians and the Philistines in the Levant, the motive to leave the Aegean is shown evidence of drought, by evidence of warfare in Mycenea and by the collapse of the Hittite empire. There is no reason to think that flight would not also have been in other directions.

The fact that the European IE languages are Centum supports a link to Centum Greek, Anatolian and Paleo-Balkan languages.

The association of Celtic with Haalstadt and the tracing of the predecessors of Haalstadt to the same region, and the documented expansion of that culture, means that an Indo-European substrate isn't necessary to connect the first documented IE languages in those areas to an earlier era.

The appearance of cremation closely coincide with the appearance of IE cultures known to be IE in India, the Balkans, Anatolia, and with Italic settlement of Italy. The only IE culture not to cremate in the pre-Christian era was the Tocharians, who were one of the earliest splits.

There near simultaneous appearance of IE peoples in South Asia, Anatolia and mainland Greece also supports the idea that this appearance may be a disaporan one in reaction to the same environmental disasters (ca. 2000 BCE) that led to the collapse of the Akkadian Empire in Mesopotamia, to the collapse of the Old Kingdom in Egypt, and probably contributed to the collapse of Harappan civilization (the period is also suggested as a motivator cremation and anti-pork dietary laws). It may have also encouraged the Tocharians to migrate South to the Tarim Basin.

The Etruscan-Limnean language family resemblence supports the idea that they (and probably the Minoans) all spoke a non-IE language and that Italy was not IE prior to the Italic.

Interestingly, there is a thin historical evidence strand for the original name of London being "New Troy" suggesting an Anatolian source for the Celtic culture in Britain which was clearly a post-Neolithic, post-Megalithic cultural wave. There is an associated tradition of the Trojan warrior arriving with his troops in retreat from the Trojan war.