Video: demolition of Bedouin homes... "to plant trees for Jews"


When the early eurocentric UN approved to divide Palestine in two and give more than half to a mere 30% of its residents, mostly recent arrivals from Europe, it took a most unjust and criminal decision overall but maybe it is particularly striking that nearly all the "empty quarter" of the Negev desert, which was 100% Arab, was also given to the new State of Israel.
Ethnic cleansing, genocide, wars, massacres followed... they are still our daily bread. Now the Jewish National Fund and the State of Israel are forcing Bedouins out of their traditional settlements into US-like "Indian reservations". They are technically "Israeli citizens" but that won't make a difference: they don't belong to the chosen race and hence they are an obstacle for the mad Nazi dream of Israel of a state only for Jews in the land of others.


Some historical maps of the Zionist land-grab, to help understanding of the perpetual Nakba: 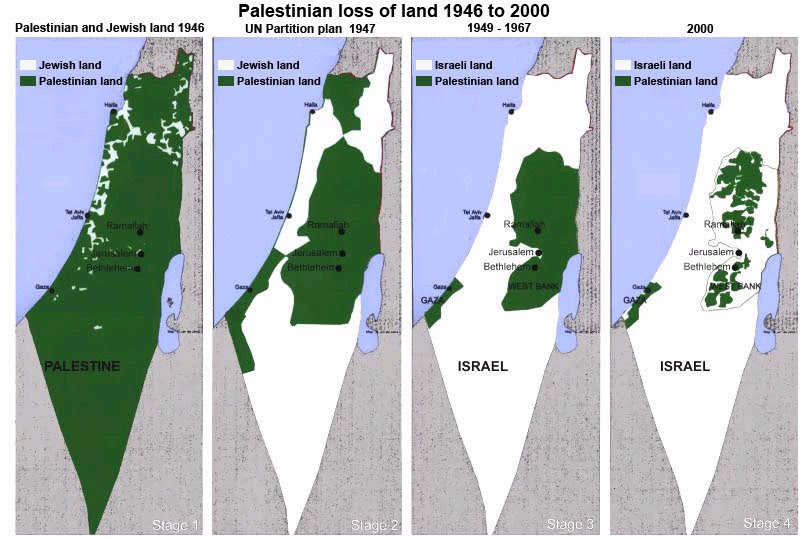 Ethnic composition in 1946 (after the post WWII Jewish migrations but before partition):

Jews were then only majority in Jaffa (modern Tel Aviv urban area) and most had arrived that very year. Before WWII there were only 10% Jews in Palestine.

You can see that there were virtually no Jews south of Jerusalem but still the eurocentric UN of the time (still more than a decade until generalized decolonization) gave the projected Jewish state almost all of that region.

And now they evict the Bedouins with tax-deductible donations.

Where did all those terrorized and expelled Palestinians go?

To Jordan, Gaza, the West Bank, Syria and Lebanon, in this order. Gaza's population is made up essentially of refugees from what is now the State of Israel and their descendants. In Jordan and the West Bank registered refugees comprise 1/3 of all population, almost 1/8 in Lebanon. Others ended up in Kuwait, where they cheered Saddam Hussein's invasion (liberation?) which granted them citizenship, and yet others are scattered around the world.

Sources: Jews sans frontieres (video), Palestine Monitor (map), Public Opinion (map), Arab Though Forum (map). Some of the maps are originally from PASSIA, which has a great collection of historical maps of Palestine, which help understanding the essential crime of Israel and why this conflict has no solution while Israel is not forced to yield to the demands of the natives of Palestine.

Update: a report emphasizing the role of Israeli students, who volunteered as "police assistants", and their Nazi attitudes is available at Voltaire Net. 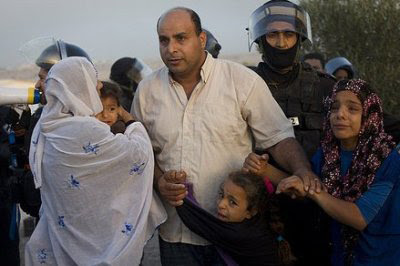 Feels to the Night of Broken Glass, really. But it's the daily bread at Nazi Israel.

Thanks so much for this post and pointing out this sad sad reality! I can't express enough how MUCH it disgusts me to see right in front of my eyes a small version of Naqba 1948 happen all over again - and nobody does anything to stop it!

Does anybody care about the PEOPLE involved? No, of course not - they don't belong to the "chosen" ones ... God Allmighty - what world are we living in??

Sometimes I think I need to start searching for another planet to live on ... a PEACEFUL one - here on this one, as beautiful as it is - people are saturated with greed and hatred and this is what sends it to hell in a hand basket! Sad ... so sad!!

I can only say that I share your feelings very much, Karin. I'd really appreciate a World at least somewhat better than this one but...

We have to be brave and keep the fight up. It is in times of crisis as the one we live in when change happens, rotten structures are demolished and sometimes a new, hopefully better, reality arises.

But often I also wish I could ignore everything and hide in some bubble with a nice tropical beach and no evil... :)