The paper requires payment and the abstract is not too informative but John Hawks mentions in his blog the essential findings and Jean Manco has already added its results to her exhaustive aDNA list.
Testing only for HVS-1 (hyper-variable control region 1) haplotypes, they found that three individuals buried in Megalithic context at Prissé-la-Charrière, near La Rochelle (Charente Maritime, France), dating to c. 4200 BCE, have the following mtDNA haplogroups: X2, U5a and N1a.

Notice that HVS-1 sequencing is subject to potential criticism because, sometimes, different haplogroups may share the same or very similar signature. Generally aDNA studies are considered more reliable when they go to great lengths to make sure that there is no contamination or sequencing error (they seem to have accounted for that in this case) and when they can confirm haplogroup adscription by testing for SNPs in the control region of the mitochondrial genome.

In any case, this is more data to add to the list of European aDNA, on which I may work out an actualized synthesis soon. It is also intriguing data.

The authors, as Hawk and others, focus specially on the presence of N1a and with good reason: this haplogroup, now residual among Europeans, has been showing up, sometimes at high apportions, in aDNA from Central European Neolithic sites belonging to the Linear Pottery culture (Danubian Neolithic, LBK by its German acronym): 1/1 in Hungary, 4/11 in East Germany and 1/10 in West Rhenania. The haplogroup nowadays is most common in West Asia and had not been found before in any European aDNA other than Danubian Neolithic and some later Hungarian ones.

It is also noticeable because its relative haplogroup I (also part of haplogroup N1) has been shown to be relatively common among ancient and medieval Danes but is now quite rare.

While other haplogroups like K or various subclades of U also seem to have experienced some contraction, their decline is nothing compared with that of N1 sublineages.

Haplogroup X2 is also somewhat noticeable in my opinion. The lineage is not that common either in Europe (excepting to some extent Orkney islands and some Mediterranean scatter) and can easily be speculated of as a Neolithic arrival. However the antiquity and wide spread of this lineage (from Europe to Native Americans via Altai) does not allow us to reach to conclusions easily.

In any case this is the oldest individual known to have carried this haplogroup. Excepting some unclear cases from the Southern Basque Neolithic (T or X), the next case are two siblings from a Corded Ware culture burial in Eulau, East Germany, c. 2600 BCE, and then some scattered findings from historical times.

This haplogroup, unlike N1 (N1a and I), does not pose any real issue because it is not really being found at high frequencies at all, just like today.

There seems to be some confusion about which haplogroup is this one: while Hawks reports it as U5a, Jean Manco does as U5b. However searching for the sequence provided by Jean herself at PhyloTree, I can only find a close match in U5a, probably a variant of U5a2a1.

This is where the sequence 16270T, 16271C leads me to. However there is another marker not defining this U5a2a1 haplogroup, 16189C, but this seems extremely variable, with matches in every other haplogroup in the mtDNA tree of humankind, so it is very possible that it only responds to individual or microlineage variance in this case.

Later the presence of haplogroup U and specifically U5 becomes less common, although it keeps showing up until present, being nowadays a most important haplogroup in all Europe, specially towards the NE. In that part of Europe we do find not just U5a but also U5b and U4 at relatively high frequencies. This is largely coincident with what we do find in aDNA, with the caveat that everywhere but Iberia, the haplogroups seem to have shrunk somewhat since Neolithic arrival (what is easily explained in terms of partial population replacement).

However there is much more than that to haplogroup U: U2 for instance has a more Asian distribution, U6 is typically North African and Iberian, being extremely rare elsewhere, U3 is typical of the Black Sea area and the most common subclade of U8, K, is very much widespread nowadays but only shows up in aDNA since the Neolithic (Alps, Central Europe, Pyrenees). Haplogroup U after all is a very old macro-lineage, by all accounts dispersed at the very colonization of West Eurasia some 40-50,000 years ago. 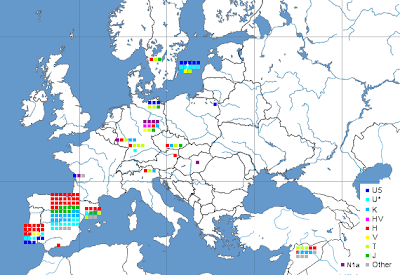 If N1a were present somewhere in pre-Neolithic Europe, it would require some kind of "partition" of the pre-Neolithic population, along with its propagation -- presumably southeastward -- into the LBK of central Europe. Seems doubtful.

I fail to see the point, sincerely. It does not require anything of that, I don't see why. We must remember that Neolithic diffusion, following the archaeological record, is a complex process in many cases showing clear signs of cultural (and hence demographic) continuity at least in the Mediterranean (Cardium pottery and related remains are often found along locally rooted Epipaleolithic tools and only in specific sites colonization seems the most likely explanation for its expansion). Even if population replacement may be a more likely case for Central Europe, there is still the unsolved problem of where did the core immigrant population originated: West Asia, Greece, Hungary or a mix of all three? The lack of aDNA for the Balcans and Turkey does not really help, the only reference remaining being the PPNB site of Tell Halula, at the Upper Euphrates.

This site does show abundance of mtDNA K and T (specifically T2b) and some presence of the ubiquitous H too, together with L2, R* and C1. The K+T combo shows up also in Central European Neolithic but the explanation for the origin of other associated haplogroups (J and N1a specially) is not clear on light of the present data. It can be argued for them having a West Asian origin certainly but the case is far from settled. The other LBK haplogroups, found in Paleolithic individuals from Europe and Morocco, can hardly be argued to have spread with Neolithic (the problem of the expansion of H to Northern Europe remains murky however with my favorite explanatory vectors being either the late Bronze Age Urnfield culture or Megalithism but notice also low Paleolithic/Neolithic sampling in the North Sea area, still allowing for UP presence for this lineage). The causes of the apparent decline of N1 (N1a and I) in Europe remain equally confusing as well.

The particular case of Prissé-la-Charrière also requires an explanation but I can only give a negative one: it cannot be attributed to LBK in any case because Danubian Neolithic never reached so far south. But it actually contrasts more with the samples related to Cardium Pottery (Mediterranean Neolithic) and Megalithism (largely "Atlantic Neolithic") in Iberia and Italy, which display a very different array of haplogroups (H, U*, U5, K, J, etc.) This in turn makes more difficult to argue for a Mediterranean or Atlantic Neolithic origin of this localized aDNA sample.

The case remains open in my opinion.

Leherensuge: European ancient DNA in sequential maps (not updated in almost a year).


Update: Link to the whole paper (PDF), courtesy of Natsuya. They report the U5 individual as U5b, by the way.

The whole pdf is here:

The fact that the individuals are not relatives by mother's side is indeed informative but less that we'd wish.

The authors report the U5 haplogroup as U5b.