The title of this article makes reference to one of the online comics I follow regularly, The Noob (a satire of massive online RP games), which, in a recent release, got the councilors of the starring Clichequest gaming company arguing about Blizzard (a real company that was recently in the news on gamers' privacy issues) as follows:

Boss (irate): We'll sue them!
Councilor 1: But they're richer than Bulgaria!
Councilor 2: I've heard that they have nuclear warheads.

And Blizzard is not any particularly large company. There are indeed about 150 corporations that are richer than Bulgaria, what means they are ten times richer or more than the gaming company (and Mongolia too).

I think this is an important point when we try to understand things such as capitalism, globalization and the reduced power of states. For some reason the pun got stuck in some corner of my head and, many weeks later, today, I decided to check what kind budgets actually manage large corporations, which corporations are these and how they compare with countries.

After some consideration, I think that company gross revenue figures compare well with state GDP (nominal) as both represent overall money flows, a measure of accountant if not truly objective nature (see my recent article on the magical nature of money maybe).

And I found that only a handful of countries are actually richer than Wal Mart, the largest company by this measure. And who says Wal Mart, easily says Exxon, Shell or BP, which are straight behind the commercial giant.

And as we run through the list of hyper-wealthy and therefore hyper-powerful companies, soon we reach some that we have never heard of. In place 18th is something called Glencore International AG, that, after clicking in the hotlink, happens to be dedicated to trading raw materials and such. This rather unknown company is richer than, not just Bulgaria, but also than New Zealand, Ukraine, Hungary or Algeria.

And by the way, the Wikipedia article is pretty much merciless with it: Glencore's history reads like a spy novel... tax evasion and illegal business in Iran... presidential pardon by Bill Clinton... dealing with rogue states... investments in Colombia... But well, I don't want to deal here too much in the peculiarities of specific companies, because surely they are all pretty much the same at the end of the day. 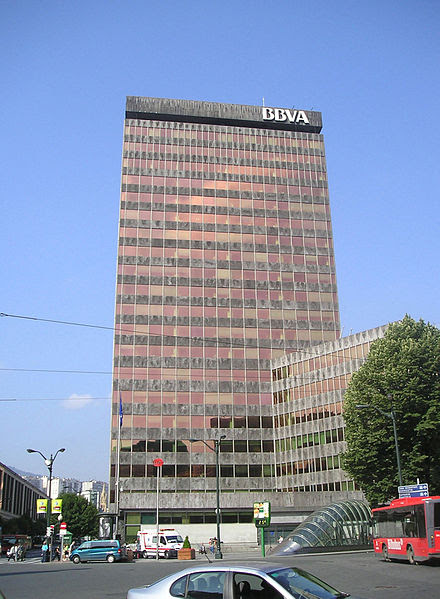 I will take instead as example instead a much more modest company, whose headquarters are located in my hometown and whose building (left) is still the tallest one by far in Bilbao. I'm talking of BBVA. I just chose it because it's a semi-local company, the pride of Basque bourgeoisie (though nowadays it is rather controlled by Spanish owners and has moved much of its infrastructure to Madrid).

It's not even the largest company of Spain (that's Telefónica, where I once worked) not even the largest bank either (Banco Santander is) and only ranks 129th globally, having a fraction of the wealth of Wal Mart or BP. But, uh-oh, it's still richer than Bulgaria (and Sudan, Oman, Syria, Luxembourg, Slovenia, Serbia, Guatemala, Uruguay, Latvia, Jordan, Jamaica or Botswana)

So does that mean that mean that if Mr. Francisco González, executive chairman of BBVA, meets Mr. Georgi Parvanov, President of Bulgaria, are they equals? Protocolarily the answer is no way but in practical terms they are indeed.

And, moving the scenario to the other side of the Atlantic, what does that mean when the Governor of Louisiana, for instance, a state with a GDP of 168 billion USD (roughly like Pakistan or Nigeria) meets the CEO of BP, whose revenue is of some 246 billion USD?