We have a new free interesting paper by researchers of the Universitat de Barcelona on the issue of the Mediterranean partial barrier to genetic flow:

G. Athaniasadis et al., The Mediterranean Sea as a barrier to gene flow: evidence from variation in and around the F7 and F12 genomic regions. BMC Evolutionary Biology 2010. Open access.

They compared a set of diverse populations from North West Africa, Iberia and Occitania (South France) and the Aegean area, using also samples from Ivory Coast and Bolivian natives as outgroups.

As the authors admit some uncertainty remains at not sampling some important Mediterranean regions. They mention Italy and the Adriatic but I'd say that a study like this would benefit from including mainland Greeks, other West Asians (Levant specially) and Egyptians, as well as some NW European outgroups (Scottish?).

I do welcome anyhow the sampling of Occitans, a much needed comparison from the viewpoint of Basque and Iberian genetics in particular. 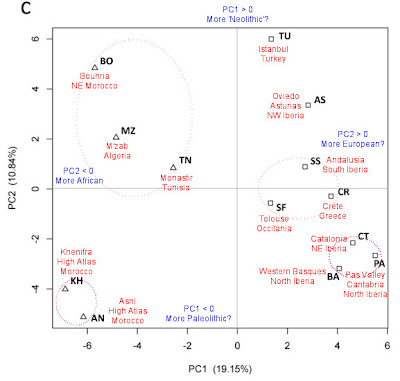 From the study I have selected this PC graph (above) as most representative of their conclusions (fig. 3C). As I like to do, I have made some annotations in various colors: in red locations of the samples (so you don't have to check fig. 1 all the time), in gray the PC axes, in blue their possible meaning (my best hunch).

I have also marked two rather tight clusters (High Atlas and Pyrenees), both with a marked tendency to one pole of the PC2 axis, and two less clearly defined ones (Other North Africans and a mish-mash of Andalusians, Occitans and Cretans).

The High Atlas (or South-SE Moroccan) cluster is the most neatly distinct of all and shows very strong tendency in both PC axes. The African tendency (-PC1)>

The Pyrenean (or North-NE Iberian) cluster shares the same characteristics but with a clear European tendency instead of an African one.

The 'Other North African' cluster is really loose and is only defined because of the differences to the rest of groups, which should have been relativized if Egyptian and Levant samples would have been included most probably. Notice that the +PC2 pole, that I have dubbed 'Neolithic' just indicates an apparent more West Asian tendency, which might or not be Neolithic as such.

The Andalusia-Toulouse-Crete cluster is probably an artifact caused by their neutrality in the West Europe-West Asia (Paleo-Neolithic) axis rather than a true clustering. In any case, the clustering of the Cretan sample with SW Europeans is consistent in all three PC graphs what suggests that, at least in this aspect, Cretans are not so close to Anatolians as geography, history and haploid genetics suggests.

Also, the position of Asturians is very noticeable because they do not cluster at all with Pyrenean peoples but rather seem intermediate between the SW Europeans with a more Medeiterranean tendency (Andalusians, Occitans) and the Turkish sample. Knowing that in other markers, such as Y-DNA, Asturias tends to cluster with other West Iberian regions (Galicia, Leon, Portugal, Extremadura) one wonders if there was demic replacement in that country and, if so, when did it happen. Because it is something that is not obvious at all in the archaeological nor the historical records.

I wonder how they choose individuals that should get sampled. As far as I know, there haven't been "autochtonous" people left in proper Toulousain (ie the right bank of the Garonne river) for 50 years. Even in tiny villages, people descend from Italian migrants that settled in the 20s or from "Gavach" people as they're called i.e. people from Massif Central (Aveyron, Lot, ...). And I doubt geneticists possess linguistic skills that could help them detect autochtonous surnames.

Sampling the high valley of the Ariège river would be more interesting.

"As far as I know, there haven't been "autochtonous" people left in proper Toulousain (ie the right bank of the Garonne river) for 50 years".

This claim sounds exaggerated and very hard to believe, Heraus. I live in an area very strongly affected by 20th century immigration and industrial immigrants almost never settle in "tiny villages" but almost invariably in the urban area. And even there the local population tends to remain somewhat strong because they are also economically dynamized by the same processes that attracted the immigrants.

I don't know the area as well you do but still I find it hard to believe.

Also among the researchers there is one from CRNS and University of Toulouse III Paul Sabatier.

"Sampling the high valley of the Ariège river would be more interesting".

Ideally sampling wider areas should be much more interesting and also producing other data for contrast than just PC graphs, which are very susceptible to sampling distortions and can only tell that much in the best case.

Populations best defined by a third component (not visible in the PC graph) will tend to behave abnormally. For example in Bauchet 07, Basques cluster very well with each other at bayesian K-means analysis but, in PC graphs, they appear totally scattered because they have very low apportions of the two main components and small individual variations in these totally change the individual position in the PC plot.

PC graphs can only tell so much and K-means analysis is a much needed complement.