Thousands of Basques demonstrate at Brussels

Thousands of Basque youths reached out to the capital of the European Union to demonstrate in demand of sovereignty and civil rights. 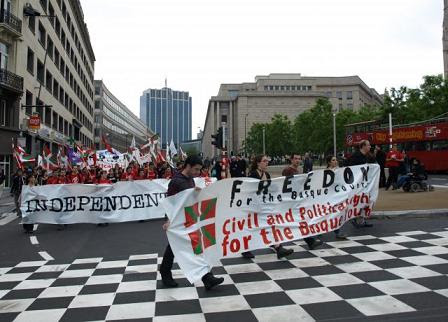 As you can see in the photo above, the central slogan of the demo was "Freedom for the Basque Country - Civil and Political Rights for the Basque Youth".

This was surely the only banner in English, others read in Basque and French: "Independence", "Committee 'Liberez-les' of Support for Political Refugees and Prisoners" and "International Solidarity - Without Rest Until Victory".

The demonstration had been called by GaztEHerria (Young People, with a letter play of EH meaning Euskal Herria: the Basque Nation or People), a plural platform of Basque organizations.

Additionally, the march had support of other European nationalist movements such as Sinn Féin and the Flemish Nieuw-Vlaamse Alliantie.

The buses departing from the Basque Country suffered from police hostigation and delaying tactics but all arrived to Brussels in time for the demo to take place.

Well, I see you FINALLY follow my suggestion to come over to Brussels. I was not in the city, but I am sure many more people

Here you have an article in French:
http://archives.lesoir.be/800-manifestants-a-bruxelles-pour-la-cause-basque_t-20100529-00XHPJ.html?query=Basques&firstHit=0&by=10&sort=datedesc&when=-1&queryor=Basques&pos=0&all=1770&nav=1

They talk about 8 hundred.
And of course, the Basques were supported by the NVA, which is a centre-right party on the rise on this side (nothing extremist, unlike what the PS wants to make people believe).

"I" followed your suggestion? I did nothing: just reporting on some news.

Anyhow, Basques have been going to Brussels and Strasbourg to little use for a long time. I was (as journalist) in a trip to the EP some two decades ago, invited by Txema Montero. Several friends of mine were in an antimilitarist journey through Europe and were not just the first ones to make an illegal demo in Milan in many many years but also the first ones ever to take over NATO headquarters nonviolently (hmmm... someone left a door open and unwatched, LOL). That was really funny to watch, specially when some irate general had to be restrained from beating them, so outraged he was. :D

We should invade NATO headquarters much more often but it's a little far away, you know. Why don't you do that, I think you live much closer... and if my friends can do it, you can too. :P

Well, I was there from the beginning (I'm living in Gent right now) and let me tell you, 8 hundred people sounds about right. Definitely not thousands.

And yes, they were supported by the NVA, but there weren't many people from it. Maybe 50 or so? Most people came (late) on the 11 buses from the Basque Country. There were, however, some memebers of "Euskal Herriaren lagunak" in Switzerland, Irish representatives, kurds, anti-fascists from Germany and some other organizations. I was real glad of seeing all this people.

Oh, and another thing. The buses suffered from Spanish police harassment, both by "Guardia civil" and national police. However, the Belgian police was pretty nice, not only did they allow us to delay the march, they also ended up escorting the buses through Brussels to speed them up. They wanted to go home, I guess, and they have nicer ways of doing so than our Beltzak.

Piña: thanks for the info. Really appreciated.

Just that right now I'm so crazily focused on digging some info on the Zionist criminal attack that I really can't even laugh at the niceties of the Belgian police. Sorry.

50 NVA people in Brussels on a weekend? That is a lot!

Do you know how difficult it is to get 50 Flemish into Brussels on a weekend for anything but going to a restaurant or pub?
I mean: it is easier to get 1000 Flemish people into Madrid than 50 of the same into Brussels for political purposes, at least during the weekend. You should really be thanful! :-p