Yi Peng et al. The ADH1B Arg47His polymorphism in East Asian populations and expansion of rice domestication in history. BMC Evolutionary Biology, 2010. Open access.
The authors have mapped the allele for alcohol intolerance within the gene among Chinese populations, both Han and non-Han (cf. table 1 for frequencies). There are sharp differences among ethnicities with Tibeto-Burman and Austroasiatic nations showing low levels of the allele.

The highest densities of the allele are in the province of Zhejiang, just south of Shanghai, where nearly everybody is alcohol intolerant. The authors have estimated possible ages for the origin and spread of this allele and conclude that it originated and spread with rice agriculture. However I am not fully convinced, as happens with all molecular clock estimates. Whatever the case it does seem reasonable to accept that the seemingly oldest variants of the allele are in Central/South Western China. 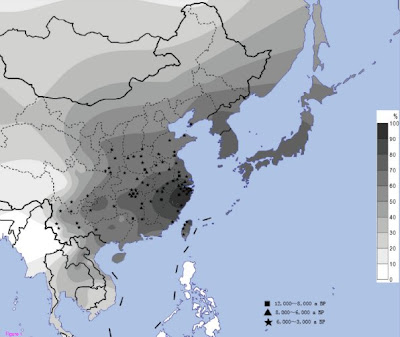 Above: map of the alcohol intolerance allele included in the study (notice that the Chinese border is pretty much fictitious, including all claims the PRC may have) with clines of frequency and symbols for different estimated ages.

Notice that if the claim of Neolithic origin and spread of this allele is correct it would frontally clash with the notion that the Mongoloid morphotype spread within this same period. Personally I am pretty much skeptic of both claims. However I can imagine that this allele may have spread along some South to North demic expansion like the one associated to Y-DNA haplogroup O maybe.

Seems odd in view of this:-

Well, not sure what to say. I'm not much of an evolutionist but rather chaotist in what regards to mutations. It'd be the same as the lactase persistence alelle: a totally random accident (founder effect) that just happen to have some function and hence maybe some use. In the case of the LP allele maybe there was some weak selective pressure in favor of it but I don't really understand the selective pressure that could be associated to alcohol (in either direction).

Just a founder effect, IMO, a mostly neutral gene like blond hair or whatever.

Did a thirst for beer spark civilization?.

Alcohol wreaks havoc on peoples who have no history of use especially historically hunter -gatherers like aborigines.

Going by Yi Peng et al The Han Chinese are the most adapted to the effects of alcohol which suggests that the Han Chinese type has evolved with agriculture (which as the above link says goes with alcohol and might even have been the motivation) the ADH1B Arg47His polymorphism is a adaptation that stops alcohol causing damage by clearing it faster while making it unpleasant to get drunk. So the Han Chinese are very well adapted people in relation to alcohol.

"The derived ADH1B*47His allele is known to metabolize ethanol up to 100 times quicker than the ancestral ADH1B*47Arg allele, providing support that quick eradication of ethanol, and therefore lower local exposure should be protective. The recent case-control studies also suggested that the ADH1B*47His allele is the protective variant [27-30]. The higher metabolic rate of ADH1B*47His may also lead to the accumulation of the toxic aldehyde intermediate that has been commonly associated with the flushing phenotype[31]. An association study in Han Chinese indicates that the individuals carrying ADH1B*47His have the
lowest risk for alcoholism[32]. It was suggested that the flushing phenotype is biochemically equivalent to the effects of disulfiram (a drug used to prevent
relapse)[33], which can influence drinking behaviour as a way of protection from over consumption of alcohol. It can also protect against the damage to human bodies
caused by alcohol consumptions".

It follows that places in Europe where there is a high rate of alcoholism are not descended from a long line of agriculturists but from hunter gatherers who turned to agriculture and are still imperfectly adapted to it. Now are north Europeans more likely to be alcoholics than south Europeans?

IDK. For me it's nothing but a random gene without any particular purpose.

I really don't understand why people has to seek for a "why" for all those random features: they are nothing but neutral variability in wait for a role. That's how evolution works: a lot of mostly useless variability waiting for the opportunity to "show their utility".

Anyhow, alcohol is fundamentally a drug, not food.

Whether certain intake alcohol is good for you is an open question; it would have to be a very moderate intake I think. Using alcohol as a major souce of calories - as a food - would not be selected for; it would swiftly wreck one's health in anything like such a quantity.

What is suggested by Yi Peng et al is that a rare 'neutral variability' that happened to protect against alcohol abuse would become very adaptive when agriculture was adopted because agricultural populations drink and the allele would keeep them from overdoing it.

Protection against alcoholism would only become adaptive when agriculture made alcoholism a problem.


A growing number of scientists argue that human culture itself has become the foremost agent of biological change.

Do you really disagree with Hawks?

Correction, it is in the context of rice farming that the ADH1B*47His allele is selected for. Clearly alcoholism is a not a problem of agriculture generally but is in fact specific to the cultivation of rice. Presumably it is easier for rice farmers to produce large amounts of alcohol for some reason.

You can produce alcohol from nearly anything that has starch/sugar (cereals, fruits, honey, potatoes...). Many agricultural societies never used alcohol but used other drugs instead, while some foragers probably collected cereals and honey with the intention of brewing some bear or mead.

Whatever the case, it's probably true that a gene that hinders alcohol abuse may be slightly favorable (prevents alcoholism and accidents while drunk). But doesn't seem like that alone would be any huge competitive advantage either, so mere founder effect is a more reasonable explanation, as weak selection is not substantially different from drift.

"You can produce alcohol from nearly anything that has starch/sugar (cereals, fruits, honey, potatoes..."

True, it may be that rice is a particularly good crop for that part of the world. Chinese rice farmers might often have a surplus of food, that surplus could be used for alcohol.

"Do you really disagree with Hawks?"

I tend to agree. What's more there's a link to a paper at anthropology.net that argues that human culture's being an agent of biological change goes back to the first appearance of our species in Africa. I suspect it may go even further back.