Issue #36 of Stone Pages' bulletin, Archaeo News, has arrived to my mailbox with at least one item worth mentioning
New Neolithic (Hoabinhian) site found in North Vietnam
The cave, known as Tham Choong, (Na Hang district, Tuyen Quang province) is dated to 8000-7000 years ago. The tools belong to the Hoabinhian culture, which lasted from some 34,000 years ago to c. 2000 BCE, spanning through Paleolithic and Neolithic.
The thousand or so stone tools recovered served for cutting, chopping and grinding. Bone tools were also found, including a sharply pointed one that archaeologists believe was used for stitching the bark clothes they probably used.
Source: Vietnam News.
Other news

Check the newsletter for other news, such as digs in North America (Utah, already mentioned here from another source, Wyoming, Wisconsin) and Britain (Bronze Age cremation cemetery at projected commercial center near Inverness, Scotland, Bronze Age person from the Isle of Man died violently, trekking path projected between Avebury and Stonehenge, etc.)
There's also a mention on Timothy Taylor's hypothesis on the baby sling being a decisive invention in human evolution (I'm a bit skeptic but who knows?)
More importantly maybe, Paola and Diego mention that they are heading again to Sardinia, accompanied by archaeologist George Nash, with the intention of persuading the authorities to open the badly sealed and spectacular Tomba della Scacchiera (image below), a Megalithic site that has serious conservation risks and also has a strong touristic potential (already mentioned at Leherensuge). 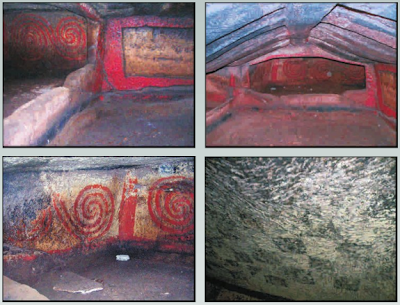 Your link to the Hoabinhian says:

"It has become a common term to describe stone artifact assemblages in Southeast Asia that contain flaked, cobble artifacts, dated to circa 10,000–2,000 BCE".

They may be referring to a proto-Hoabinhian culture or there may be controversies on dates, I can't say.

Thanks for that clarification. Perhaps the researcher is attempting to place the Hoabinhian earlier than is generally accepted. That would put the development of agriculture very early in Vietnam. Patriotism at work?

Hoabinhian is not a Neolithic culture but a Paleolithic one, which, like Caspian in North Africa, became Neolithic at some stage.

I do not know right now why they argue for 34 Ka but I presume they have their reasons, even if these are more or less disputed. It'd be useful to clarify this point but I cannot right now.

"Hoabinhian is not a Neolithic culture but a Paleolithic one"

Depends what you call 'Neolithic'. You've several times claimed the Maori of New Zealand were Neolithic, yet they were certainly no more 'Neolithic' than was the Hoabinhian. From Wiki:

"The term was redefined in 1994 by archaeologists attending a conference held in Hanoi. At this conference Vietnamese archaeologists presented evidence of Hoabinhian artifacts dating to 17,000 years before the present. A vote was held where is was agreed that [1]

I doubt that number 5 means it should be called Paleolithic. Concerning sumatraliths Wiki has this to say:

"A sumatralith is an oval to rectangular shaped stone artefact made by unifacially flaking around the circumference of a cobble. It is often used to infer the Hoabinhian character of a lithic assemblage".

So it's hardly a characteristic 'microlith'. The lack of microliths in the industry also argues against your association of Homo sapiens with the expansion of microlithic technology. Unless you're claiming that the Hoabinhian was not made by 'modern' humans. Further on in the Wiki article:

"While Solheim noted that the specimens may 'merely be wild species gathered from the surrounding countryside', he claimed that the inhabitants at Spirit Cave had 'an advanced knowledge of horticulture'. Solheim's chronological chart suggests that 'incipient agriculture' began at about 20,000 B.C. in southeast Asia".

So they had agriculture, basic as it may have been. Does that too make them Neolithic?