US Secretary of State, Hillary Clinton has declared that she wants the USA to intervene in Mexico "against drug gangs", the same it has been doing in Colombia and other countries. In fact she likened the decaying situation of Mexico to Colombia, however she claimed that the Plan Colombia, that has allowed the USA to establish an effective protectorate over the South American country, has been a success, what is plainly false - unless by success you mean taking over a whole country.

In this sense we must not forget that, on a similar pretext, the, until this year, famously demilitarized and rather prosperous, Republic of Costa Rica, allowed a few weeks ago the USA to take over it. Additionally the USA also controls Haiti, a major narcotrafficking hub (because of deep poverty and lack of democracy, thanks to Uncle Sam again). And we must not forget that, what used to be considered the main US base in Central America, Honduras, suffered a reactionary military coup last year, ousting the legitimate President and turning the country in a factual autocracy with US blessings. 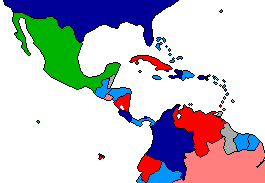 Geopolitics of Middle America
Dark blue: USA and protectorates, light blue: US allies and their colonies
Red: Bolivarian bloc (ALBA), pink: other left-leaning governments
Green: Mexico
So now Hillary wants to add Mexico to the cyclops' menu. But this has rallied all Mexican politicians against. Even if this would not be the case, Mexico may indeed be a too big and too resentful piece of meat to swallowed by giant Uncle Sam. Mexico lists among the 20 largest economies of Earth, has a reasonably strong popular movement, and has many historical reasons to be wary of the USA, which took Texas, California and all what is between them and also partly invaded the Aztec country again during the Mexican Revolution.

There is already a lot of opposition in Mexico to the North American Free Trade Agreement (and the less known Security and Prosperity Partnership of North America) which is considered by many as the main culprit of the degeneration the country is suffering in the last decade or two.

The country's political system is however pretty much blocked by the fact that the PAN (conservatives) won the last elections by means of massive vote rigging. However the left is divided between those supporting AMLO and the PRD (social-democrats) and those who see no or little change possible with them. It is a clear case of "revolution needed urgently" and that is precisely why the USA wants to get greater direct control, probably. However it may well backfire, because a US invasion, even if sanctioned by Mexican institutions, would provide a rally point for all proud Mexicans who are never really happy about their beefy neighbor by the North.