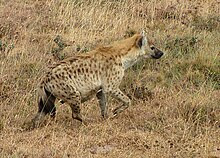 Spanish researchers have published a new paper on the extinction of spotted hyenas (Crocuta crocuta, the same species dominant in Africa) in Europe and Asia. Apparently hyenas lived without much trouble in the Mediterranean areas of Eurasia until c. 10,000 years ago, when they became extinct. This is also the time of the end of the last Ice Age.
Lead researcher Sara Varela says that climate change in the past was not directly responsible for the extinction of the spotted hyena in southern Europe, but it was a factor in its disappearance.
Source: Science Daily, illustration from Wikipedia.
Ref. Sara Varela et al., Were the Late Pleistocene climatic changes responsible for the disappearance of the European spotted hyena populations? Hindcasting a species geographic distribution across time. Quaternary Science Reviews 2010. Pay per view.
Posted by Maju at 7:04 PM

"climate change in the past was not directly responsible for the extinction of the spotted hyena in southern Europe, but it was a factor in its disappearance".

Very unlikely to be a major factor. From what we know of the hyena's habitat today we would assume that warming would have improved its chances. What the evidence suggests is that Eurasians were better at eliminating predator competition than were Africans.

Be reasonable. Surely not 'everywhere'. Parts of the steppe are unlikely to have been forested. And don't say it would have been too cold there. Open grassland or savanah would certainly have survived.

Terry: we discussed sudden reforestation up to Denmark recently (the thread on mammoths). Can hyenas migrate from Spain to Moscow to escape that trend? Can they survive in the cold Russo-Siberian steppe at all?

"Can they survive in the cold Russo-Siberian steppe at all?
"

The claim of the article is 'climate warming', not cooling. If hyenas could survive through much of Eurasia during cool times surely warming should help them. And in regions of low rainfall open habitats would survive. The hyenas obviously didn't survive in such habitats.

And warming is what brought the trees northwards, it seems that before the Younger Dryas. That was what the mammoth research said: that even if the steppe returned briefly in the Younger Dryas, mammoths and woolly rhinoceros did not (only in Scandinavia peninsula but not in continental Europe).