Behind the "religious conflict" in Chiapas: a fundamentalist army

It has been presented by the Mexican government and some media as conflict between "Protestant" and "Catholic" natives but what is in fact going on? According to La Jornada the real issue is the formation of paramilitary militia of Evangelical (fundamentalist Protestant) ideology self described as El Ejército de Dios (God's Army).

This "religious" death squad has already been involved in many violent actions, including the murder of a local politician. They are apparently in connivance with the police, both at state and federal levels, as well as to the Evangelical groups that perturb neighboring Guatemala (there as well in connivance with the army and the totalitarian and genocidal regime of Ríos Montt, who was preacher of these cults). 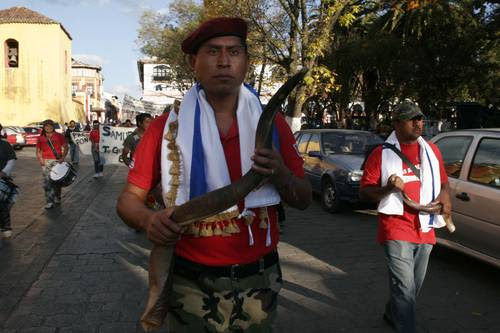 "Orangist" marches in Chiapas, what else?
This God's Army is not indigenous and has as program to de-indianize their adepts. Recently they marched through the city of San Cristóbal de las Casas with the music of the Imperial March of Star Wars (the music associated with Darth Vader, you get the point, right?) Their aggresive discourse is similar to that of the undemocratic Mexican government, opposed to the Zapatista bloc, against whom they act essentially.

Oh gargle! Rios Montt contributed mightily to the ongoing messes in Guatemala, and he was a big supporter of people like Jerry Falwell. He was also a big supporter of the death sqiads and US intervention. He's been an "evangelical" for a long time, too. What are his offshoots doing in Chiapas?????

Promoting the Novus Ordo Seculorum, as says in the reverse of good ol' George's notes.

IDK, really. I read the other day somewhere about a squabble between "Catholic" and "Protestant" natives in Chiapas, supposedly about something as silly (in a jungle area) as is wood, that was quelled by police or military intervention. They even had got prisoners. I could not find the original article today to check the details one by one but when I read today at La Jornada that there is a cult-like militia, that works with the police against the Zapatista communities, I thought I had to mirror the news.

Chiapas is just besides Guatemala anyhow and all is Maya Country (though Mayas are also very diverse). In fact Chiapas originally was part of Guatemala but for some reason ended up in Mexico.

This "Christian army" v. the Zapatistas is probably in large part, "what it's about". The Maya and other native groups in Mexico and Guatemala have not been treated well; though this is changing somewhat in Mexico, at least, there is still a lot of "native" resentment. This "Chrisitan army" or whatever it is, may be some sort of quasi-government proxy to "keep the natives in their place".
Anne G

It's a paramilitary cult meant to serve the oligarchy, the state and the empire. That's clear. They have made some inroads in some specific tribe but they are not any sort of native organization, they have as part of their program the acculturation of natives.

Instead the Zapatistas are a native organization (and are not specifically "Catholics" or anything religious).

Never said that the Zapatistas were "Catholic" in any sense; they seem to be heavily "Mayan", however, and they want their rights. That's kind of why I said this paramilitary outfit may be a quasi-governmental proxy.
Anne G

It was not you Anne, but the news item I read (can't recall where) before finding this other version at La Jornada. They painted the last serious squabble as a religious conflict between "Protestant" and "Catholic" natives.

AFAIK, until recently Mayas and most other Latin American natives used to mix their ancestral beliefs with Catholic ones in eclectic manner (much as must have been the norm in Medieval Europe as well, before Counter-Reform).

And yes, the God's Army looks like just another paramilitary group with vocation of death squad, just that in this case they use a religious pretext.