A reader has been so kind to send me a copy of this Chinese paper, which I have hanged at ZohoViewer:

The paper is in Chinese (and can't find any English version) but has loads of nice and informative graphs and maps with legend in both languages about macro-haplogroup N and some of its derivatives, specially A and N9 (incl. Y).

As the saying goes: an image is worth more than a thousand words... specially if these are in a language you can't understand. Still, if any of you can read some Chinese and give some feedback, I'm of course interested.

Most importantly the paper seems to confirm a SE Asian origin for macro-haplogroup N. Specifically it suggests a SE Asia as probable origin: 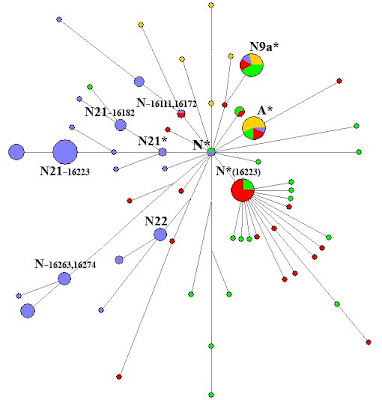 Fig.2 A simplified Median-joining Network of haplogroup N based on mitochondrial HVS-1 Keys for the colors: Red for the Tonkin Bay area, Green for South China, Orange for North China, and Blue for Southeast Asia. 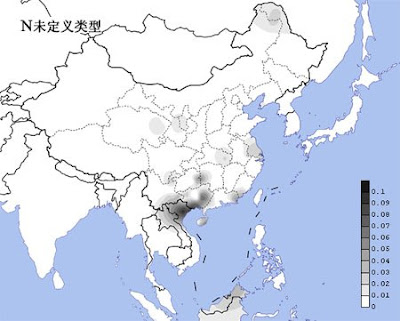 Fig. 4 The frequency distributions of unclassified N [top] and N*(16223) [bottom]
Another relevant finding is that haplogroup A seems to be also original (like nearly everything) from South China/SE Asia: 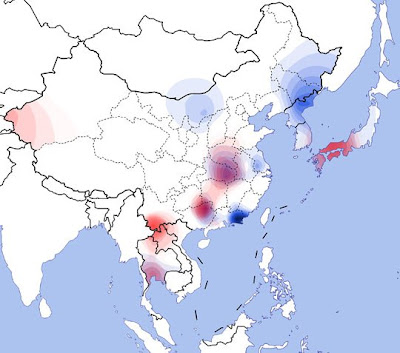 Fig.10 Diffusion of the mitochondrial proto-A haplogroup. Blue clines stand for the total frequency, and red clines stand for the mutation rate within the population.
Notice that "proto-A" seems to mean A* rather than some pre-A standing between the N and A nodes. That's what I gather from the phylogenetic context in other figures but if anyone can clarify further, I'll be thankful.

Finally as the genetics of SE Asia and in particular Island SE Asia have been recently matter of lengthy discussions in this blog, I think that this map on ISEA N9 (N9a and Y2) may be interesting: 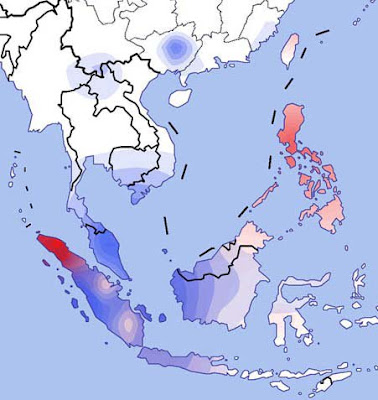 Fig.28 Distributions of the mitochondrial haplogroups Y2 and N9a in Southeast Asia. Blue stands for Y2, and red for N9a6.
But anyhow, take a look at the paper even if you can't speak Chinese because there are a lot of maps and phylogenetic graphs, all of them of interest.

One thing they have in common though: the spread of all lineages seems to begin in South China/SE Asia.

Anyway, the point is moot now, from a phylogenetic point of view, after the discovery of KMNOPS (possibly T and L). The split between the above and IJ/G (possibly T and L) most likely occurred before the Central Asian and coastal splits.

I'm glad that you and Ibra are addressing Songkoro's doubts. :)

But I don't see how does Y-DNA MNOPS contradicts this southern origin model.

As of now MNOPS includes the four major haplogroups in its name plus SE Asian and Melanesian K-other (probably also Australian K-other) and certainly it does not include T and L, or otherwise it would be indistinct from K.

I have argued elsewhere that MNOPS, including SE Asian, Polynesian and Melanesian minor K lineages, actually means a SE Asian coalescence for MNOPS. Even Terry, who is adamant of the "northern route" agreed with me on that. The fact that R seems to have coalesced in South Asia and that Q, once considered all minor but high level clades, looks like centered in East Iran, emphasizes that at that moment there was no flow yet through the Siberian corridor, which was probably only inagurated by the migrations of Q.

It also emphasizes the old age of K, MNOPS, NO and P, which should have been there in the whole Eurasian Expansion process, which essentially pivoted around South and SE Asia.

Maju wrote, "But I don't see how does Y-DNA MNOPS contradicts this southern origin model."

When did I say anything of that sort. Your not listening, and what a convoluted theory you guys have come up with here. So Q is Iranian? If they were the first in northern East Asia, that would mean Siberian mtDNA lineages were the original Iranian lineages. Makes sense given the replacement that happened in Iran by later agriculturalists.

"When did I say anything of that sort. Your not listening"...

You don't seem to be explaining very well. :(

What I said is that considering all minor but high level haplogroups an East Iranian (i.e. near AfPak) centroid seems to appear. IMO the origin should be more NW South Asia than Iran as such, specially considering the rest of P and MNOPS.

"If they were the first in northern East Asia, that would mean Siberian mtDNA lineages were the original Iranian lineages. Makes sense given the replacement that happened in Iran by later agriculturalists".

Actually Iran, or at least the better studied Zagros province (cross-border) seems to have gone deserted long before, around the LGM.

Later, in the Epipaleolithic, the area was recolonized with peoples which seem to derive from Eastern European Gravettian culture (and that IMHO spoke proto-NE-Caucasian). Their culture is called Zarzian and gave rise to one of the earliest Neolithic groups worldwide and were also at the origin, later on, of the Sumerian civilization.

Unless you know something I do not.

So, your idea is that the original Iranian mtDNA was more like modern Siberian lineages. Interesting, although I have rather reservations about this idea, although this might explain why Iranians have so much what is now defined as E. Eurasian lineages: http://s6.zetaboards.com/man/topic/529104/

"So, your idea is that the original Iranian mtDNA was more like modern Siberian lineages".

No. I haven't said that. I haven't even mentioned mtDNA as of now nor I have made any emphasis on Iran. Why do you put words in my mouth?

Besides, reconstructing the MP-UP transition's genetic pool of Iran (of all places!) really overwhelms me. What you say about West Iranian peoples having 12-13% of "East Eurasian mtDNA" is interesting but ambiguous. I'd need to see what lineages exactly and if the result is reproduced in other studies or is product of sampling accidents. Being mtDNA it is probably something old which can't be explained by the brief Mongol rule (besides: Mongols were never a tribe of "amazons") but I can't really discuss it without knowing the matter in further detail and comparing with the genetic pool in places like Central Asia (particularly).

The Persian sample's (n=82) East Eurasian mtDNA can be divided in two categories:

2. More interesting is maybe the 6.1% of haplogroup B, which has no such correlation among Tajiks and might (tentative) be part of some older flow via South Asia (where B and F are known to exist).

The "high" apportion of D4 (12%) in the Kurdish sample is probably a sampling accident, because the sample is really small (n=25).

The relatively high M* might well be mostly M1, which was not tested for. Anyhow, South Asian M lineages in Iran would not really be something unexpected (and there are lots of them, some of the large ones not being tested for either).