The strange case of the Glozel findings.

I just now have got to know about this confuse issue of never proven alleged archaeological forgery at Glozel, at the outskirts from Vichy, central France.

It looks quite intriguing.

And the death last month of the main actor, Emile Fradin, at the venerable age of 102 years, seems to have triggered renewed interest for the issue.

Emile Fradin
Via Archaeology in Europe, I found this article at The Age. The case for a barely literate peasant under 20 years of age to have forged all those artifacts looks extremely unbelievable, more so when he never made real money of them, rejecting all offers of purchase of his findings.

The findings, if real, would seem some sort of secret collection: they were organized in shelves and they include items from three different types and periods (per the analysis of F. Henri in 1972): engraved bones from 17-15,000 BP (early Magdalenian), pottery is from 5,000 years ago (Chalcolithic) and the written clay tablets are from some 2500 years ago (barely pre-Celtic). 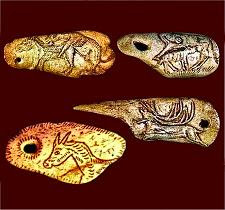 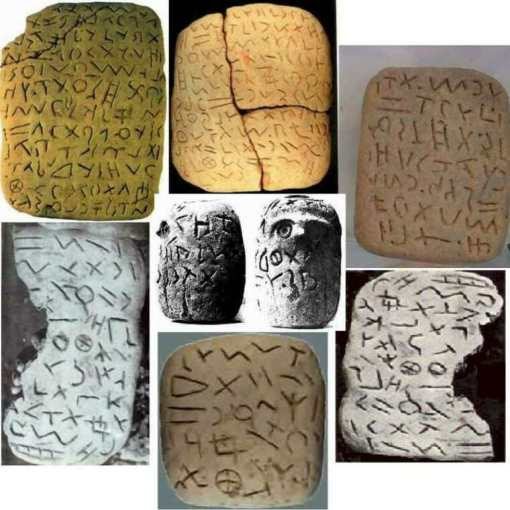 The inscriptions remind, with some differences, the Iberian script. At least they are within the context of early Mediterranean scripts.
However why all these materials had been gathered together into a single mysterious collection appears to have no explanation than the site being the hoard of some early archaeologist of Antiquity or the Middle Ages (the Templars have been speculated about, as usual, but the lack of Christian iconography makes this unlikely in my opinion).
Sources:
- Tejiendo el mundo[es] (from where I borrowed the images)
- Musée de Glozet [fr]

Hi Maju. What gives it away, imo, is the "horse" image at the lower left. Hopelessly insipid, not even close to what one would expect from a genuine source.

I don't know, really. Allegedly the artifacts were dated by three independent labs in 1972 and the issue is odd to say the least. I mean: how could a peasant youngster make such forgery and what for?

Even Abbe Breouil initially gave credit to the issue, though he later pulled back, except for the pottery.

Whatever the case worth mentioning because I think it's incredibly hard to make such a massive forgery (it's not one or two items). And what for anyhow? He could have made lots of money and did not.

Anybody had seen the Glozel reindeer stone and the Ica glazed stones of Peru?
What are the similarities and the differences?
Would be great to know.