The Neolithic aDNA map of Europe 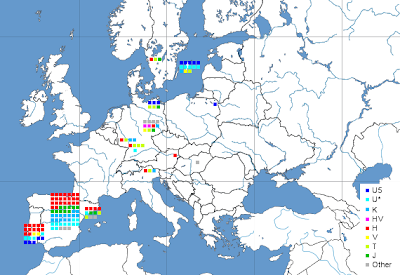 For comparison, see my previous post and map, on Paleolithic aDNA. I tried to use the same color coding.

It is quite hard to deal with, as we have huge blanks, specially in the East and SE. It would seem that Danubian Neolithic (LBK) meant a "Mediterraneization" of Central Europe. The new lineages nevertheless should have been picked up in the Balcans or Middle Danube but we have very limited data for that area. What we do have though (Austria, Hungary, North Italy) is consistent with such idea: 2 H, 1 T, 1 N1a (or 1 H, 1 N1a if you prefer to skip Italy).

It must be said that the importance of the oddball N1a seems somewhat hyped, as most of the cases appear in a small and then rather marginal area of East Germany that just happens to have been oversampled. If we exclude that district, the LBK mtDNA pool has only one N1a case, with T2 (4), H (3) and K (2) being the dominant lineages instead.

A counterpoint is Iberia, where Neolithic data is abundant:

In Portugal, continuity is pretty obvious: H, U5 and U* (U6?) persist at similar apportions as before and the main change is the loss of some "other" lineages and incorporation of novel V ones.

The large Basque sample does not belong to the archetypical mountain Basques but to the populations of the Ebro Valley, where the anthropometric data shows a clear input of "gracile mediterranean" types upon Neolithic arrival. It has nevertheless loads of H (c. 40%), suggestive of a good deal of continuity with the pre-Neolithic populations, if these were similar to the known Portuguese ones. The presence of U in large amounts is also suggestive of continuity and should be U5 and possibly U8a. K, J and that T+X "other" groups (totalling c. 40% too) look of Neolithic arrival, though the place of coalescence of K and T2 has not yet been determined safely.

A similar case seems to be that of Catalonia, though here I miss the mtDNA K, so over-abundant in the Basque case.

Haplogroup X: not detected in aDNA up to Neolithic. The Basque Neolithic sample of Izagirre mentions 3 "T+X" but considering what is found elsewhere in Europe at the time, it's probably all T. Today mostly West Asian (X2), North African (X1) and Native American (X2).

1. Corrected the legend to show haplogroup K.
2. Added Ötzi's K lineage to the series of Alpine Italy, as it's within that timeframe.

Please notice that the dates of the samples vary from c. 5500 to 3000 BCE. The later samples would be considered Chalcolithic by most prehistorians but the Baltic groups with high U were all (regressive?) hunter-gatherers. The dividing line between the various periods is not something straight but I find better anyhow that the maps follow consistent chronological timeframes. In this case, the map covers the period between Neolithic arrival and that of consolidation of Kurgan immigrants (Indoeuropeans), at the early/middle 3rd milennium (Globular Amphora and Corded Ware), event that may well split European Late Prehistory in two.
.
Posted by Maju at 11:07 AM

This is from argiedude. Maju, nice maps. You have to add the legend for the blue squares (K, right?) in the Basques, between the green (J) and light blue (U*). I presume the Portuguese Neolithic by Chnadler was part of the same study that tested the Portuguese paleolithic, right? And there's no haplotype data, I presume?

You have to add the legend for the blue squares (K, right?) -

Right. My bad. I also wanted to make both maps the same size and somehow I did not. :/

Chandler 2005 reports two sets of data for Portugal: Epipaleolithic ("Mesolithic"), n=9, and Neolithic, n=23 I think. They do not give the haplotype data nor any extended info (it was a presentation for a congress, not a full-fledged paper). I had to determine the number of individual cases by using graph apportions, so minor error (one indvidual misplaced) is not excluded in the larger Neolithic sample (the Epipaleolithic sample is very clear: 5 H, 1 U5, 1 U* and 2 exotic).

They mostly discuss, based on a PC graph, whether the two populations are related or not. They decided they were not but I think it's not fully justified and maybe influenced by Zilhao's position on the extent of change with Neolithic arrival in Portugal on an archaeological reasoning that I may not agree with. They do admit that the source population for Neolithic cannot be West Asian, because it lacks haplogroup J and also that it can't be totally determined wether there is continuity or not, as the Epipaleolithic sample is too small.

My impression instead is that of possible continuity based on that of H and U (including U5). But admittedly I have no explanation, other than chance, for the vanishing of the exotic fraction and arrival of V. Chance cannot be discarded in any case, specially as most Epipaleolithic individuals were from a small district (Sado valley), so it may be a similar case as with the N1a in Neolithic Germany: very localized founder effect/s.

Ok. Fixed the issue of K and also that of different map sizes (don't know why this last happened).