Paleolithic tools in Japan from 120,000 years ago 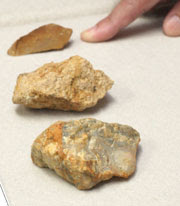 Most fascinating discovery the one that Mundo Neandertal mentions today: lithic tools have been found in Japan dating (by stratigraphy) to 127-110,000 years ago. The information I could read so far is very limited (metions sharp lithic tools, not the typical Mosuterian or Acheulean biface) but it may suggest that our kin were already in Asia as early as that date.

Of course, the tools could have been made by some other Homo species, like Homo erectus but the dates are in concordance with the earliest known presence of our species in West Asia (dated arguably to maybe as early as 130,000 BP) and maybe South Asia too, where the first bladelets appear c. 105,000 BP. Even if not conclusive as of yet, the finding seems to add evidence to support an early out of Africa migration at the time of the Abbassia Pluvial, when the Sahara was green and transitable.


Update (Sep 11): I found a half-decent article from the blog Heritage of Japan that even includes a picture of some of the 20 artifacts. Most interestingly the artifacts have been re-dated to c. 70 Ka ago, a quite reasonable date for the arrival of the very first H. sapiens to the area. They are clearly  not Acheulean (the technology of H. erectus) and could well belong to the flake industry tradition of our kin in Eastern Eurasia.
.
Posted by Maju at 8:40 AM

Hombre, estos japoneses...they always want to be first: there is a permanent competition between them and the Chinese on who produced the first ceramics and now on the first Asian tools, so archaeologists keep finding older things on either side of the sea :-)

In principle one should not doubt of the professionality of either nation's scientists. There was one case of fraud in Japan but was soon exposed by Japanese journalists.

Japan anyhow, as well as coastal China, should be among the earliest areas to be colonized in the area, in my opinion, of course after the rather neglected SE Asia in any case.

"of course after the rather neglected SE Asia in any case".

Really? Doesn't this find rather support my argument?

Your argument of what?

"Your argument of what?"

My argument that an early element in the settlement of Australia came down from the north. And, in turn, these people had earlier come across Central Asia.

Leaving aside the probability that no 'modern' human haplogroups are involved, the only Y-hap that could be there at the time is C1 (or possibly some sort of D), and mtDNA can only be Y or N9. SE Asia at the time was certainly not occupied by 'modern' humans so they couldn't have come through there.

SE Asia at the time was certainly not occupied by 'modern' humans so they couldn't have come through there.

How do you know that? That something has been found in Japan doesn't mean it was not in SE Asia at about the same time and has not yet been found. Sadly enough the archaeological research is very uneven through the world, with more advanced and rich countries often leading it.

And it has not been found in Central Asia either, so WTF?!

"And it has not been found in Central Asia either, so WTF?!"

You've got a very short memory. Don't you remember all those links I sent you that showed human occupation of the Altaian Mountains/Lake Baikal/Upper Amur River regions is virtually continuous from long before any date you might care to come up with for the change from archaic to modern humans. In fact the Japanese population of this post is presumably simply the eastern end of that cline. As for the particular technology, I've many times come up against your argument that technology is invented independently. Are you going to change the rules again now to suit your beliefs?

Yes, I have short memory maybe. But weren't all those artifacts typically Mousterian? These in principle are not (sharp edge) and actually I know of now Mousterian or Mousteroid industry in East Asia at all.

"But weren't all those artifacts typically Mousterian?"

Basically yes. But actually mostly the even more primitive pebble-tool tradition that did, in fact, reach down into SE Asia. But some of the more recent sites did contain more advanced technologies, although the dates are nowhere near as old as those claimed in this post.

But you still have a problem with including SE Asia in this technological expansion. We have the tradition being found in Japan '127-110,000 years ago', 'in West Asia (dated arguably to maybe as early as 130,000 BP)' and in 'South Asia too, where the first bladelets appear c. 105,000 BP'. Yet you claim the Japanese technology came via India.

Besides which the hand-axe tradition had long before reached much of India but never managed to get into SE Asia. Implies a long-standing difficult transition zone between India and SE Asia.

By the way. Like Kepler I'm reasonably sceptical of the Japanese dates offered.

Ok, we have an archaeological blank in SE Asia. But I think it owes more to poverty, wars and authoritarian regimes severely limiting research than to an actual lack of Prehistory. There are too many findings just the other side of the border in modern China to think otherwise. Plus there's really nothing until much later than we know there was people in Australia or the settlement of Indonesia by archaic hominins... so I think that, if we go nitty picky, we could surely rescue the UFO theories. :P

"There are too many findings just the other side of the border in modern China to think otherwise".

But those finds are all much more recent than the time we're looking at here. Besides, there are actually many finds in SE Asia outside the regions of 'poverty, wars and authoritarian regimes' that confirm what I've claimed.

I've noticed that you have developed a series of coping strategies when the evidence conflicts with your beliefs. At the most basic level you simply claim drift or founder effects to explain the conflict and support your own belief. If this is inadequate to cover the situation you next claim that the study highlighting the conflict is seriously flawed, the authors are mistaken. When even this is inadequate, and the whole consensus of scientific thought is in conflict with your beliefs, you merely claim you are the only one who is correct and the rest of the world is wrong.

No wonder you are so convinced of your beliefs.

But those finds are all much more recent than the time we're looking at here.

There are very few non-Mousterian (or non-pre-Mousterian) findings in all Greater Eurasia for the date we are talking here at all. I can't think of anyone for 120,000 BP other than this one, if it is at all (the info is too limited).

You twist the meaning of all: instead of contemplating the potential implications of new findings, you try to force all to fit your preconceptions, namely: hybridation with Neanderthals and arrival to Australia somehow via Central Asia (but not SE Asia).

For me there are potential implications in this finding, like further evidence in support of an early OOA. You are already building castles (your pre-concieved type of castle in particular) on thin air, and I cannot but dismiss that.

Updated: redated to 70 Ka ago and photo.

Thanks for the update.

"Most interestingly the artifacts have been re-dated to c. 70 Ka ago, a quite reasonable date for the arrival of the very first H. sapiens to the area".

"They are clearly not Acheulean (the technology of H. erectus)"

If, in fact, H. erectus and H. ergaster are separate species the Acheulean is actually ergaster, not erectus. The Acheulean did not reach East or SA Asia.

'For me there are potential implications in this finding, like further evidence in support of an early OOA. You are already building castles (your pre-concieved type of castle in particular) on thin air, and I cannot but dismiss that".

But time has shown it was you who was 'building castles'. At the time I wrote, ' Like Kepler I'm reasonably sceptical of the Japanese dates offered'.

"The Acheulean did not reach East or SA Asia".

True (except for a site in SE Asia). My bad.

Millán considers the finding suspect with all due caution.

What site in SE Asia? and when?

It's an issue that came by in our previous discussions of the "Movius Line". You could just make a search, as I did:

Mostly the Bose basin site in Guangxi-Zhuang and some sites in Indonesia, but Wikipedia also mentions some Korean case I am unfamiliar with.

Thanks for a very interesting set of links Maju. I'd never seen any of them before. The first does suggest that the presence of hand-axes in the East does not at all demonstrate any contact with western regions. So we can't really call them an indication of the 'Acheulean':

"As such, the east Asian material should not be used to support scenarios involving the intrusion of western Acheulean traditions into the region during the Middle-Late Pleistocene."

And an interesting observation made in the paper:

"For example, the Ganges-Brahmaputra river system in India could have functioned as a formidable impediment"

Now, where have you heard that suggestion before? And another statement in the first link:

"Dennell has noted that '[a]n inescapable aspect of South Asian geography is that India is difficult both to enter and to exit".

Another point I have constantly been trying to make.

The third (Australian) link is probably the most interesting. Their main complaint seems to be the implied 'inferiority' of Eastern humans as compared to western ones. I'm sure neither of us makes any association between 'primitive' technology and primitive genetics. An interesting comment:

"Fieldwork in the Deccan region of southern India also suggests that Neolithic bifacial axe blanks are prolific as surface finds (Brumm
et al. 2007) and are often diffcult to distinguish typologically from objects classified as handaxes"

The authors suggest that 'hand-axes' continued to be made until 'Neolithic' times:

"Our brief review suggests that many (possibly most) ‘Acheulean’ bifaces in western Old World regions are found in surface contexts and so cannot be unambiguously linked to early hominins".

But their main argument seems to be that the Movius Line is artificial. We await further developments.

India may have rugged borders but by no means impassable. It's not harder to cross the Ganges than to cross the Lombok Strait towards Flores.