Ridiculously enough the Lesbian authorities, those of the Greek island of Lesbos, near the Turkish coast, have begun a crusade against lesbians in Greece and around the World. They want to banish the use of the term lesbian, to refer to female homosexuals.

But the fact is that the term is much older than modern homosexual liberation movement: it dates from antiquity, because of the quite apparent bisexual tendencies of the island most famous poet ever: Sappho. Ironically, Sappho herself also suffered from that Lesbian (that not lesbian) intolerance in her life, as she was exiled to Syracuse c. 600 BCE. 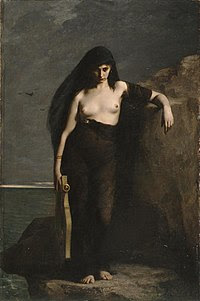 Sappho as imagined by Charles Mengin

Her romantic poetry (preserved only fragmentarily) makes allusions to male and female lovers and crunches indistinctly. For that reason, since classical times, the terms sapphic and lesbian became synonim with female homosexuality, meaning that is still in use in many languages.

Well, considering all the trouble Greeks are making on terminology (see the absurd dispute on the name of Macedonia), any day the very use of the nouns pitagorean, Alexandria, aphrodisiac, olympic and even strategy will be challenged on grounds that they are "historical Greek terms that nobody else has the right to use". Are you unlucky enough as to have a Greek name like Alexander or Hercules? Maybe you will be prompted to change it. Do you follow some approximation of an ancient Greek philosophy like Epicureism, Stoicism or Platonism? Maybe you have to redefine your ideology in non-Greek terms. What about telephone and all other common neologisms construed on Greek words? Maybe an acronym for long-distance-talk-device, like LDTD, will have to be used instead...

Pathetic. Instead of being proud of their most famous citizen, Lesbians, or at least some of them, are making a fool of themselves.

I think the lesbian debate is kind of silly, but in some ways the Greeks may have a point about Macedonia (not that I think they should be able to reclaim the name of the Macedonians now there). I had a Slavic Macedonian colleague ask me what nationality Alexander the Great was. I knew what she wanted me to say, so I answered, "Macedonian." She smiled, "Yes, you're right. Don't let anybody tell you he was Greek." Of course I didn't bother to point out that the Macedonians of Alexander's time were not those of today: the former spoke a dialect of Greek rather than a Slavic language as the inhabitants of modern Macedonia do. So maybe the Greeks are upset at Macedonians trying to "appropriate" Alexander the Great. These whole debates are kind of silly but amusing nonetheless.

Yes, we all know (or can find out easily) that. Philip's and Alexander's Macedonia was (originally) mostly the modern Greek Macedonia. But to make an internatonal row with a friendly neighbour just because of that is beyond my comprehension.

Rumania has never protested Moldova's name (Moldova or Moldavia is also a part of Rumania), nor has India bothered to anny Bangla Desh (meaning "Bengali homeland" or "nation") because West Bengal is part of India. Brazil doesn't denounce the USA for their quasi-monopoly of the term "America" and the two Congos live side by side quite peacefully.

Classical Macedonia is just a part of the history of Macedonia. The modern concept of Macedonia is that of the Ottoman province of that name, that was somewhat capriciously divided by Serbia and Greece in the second Balcanic War (1913). much of its current ethnic makeup is very recent (Turco-Greek agreement on mutual ethnic cleansing, Jewish genocide and emigration to Israel, assimilation and expulsion of Slavic Macedonians and Bulgarians of the border areas...). If the fruit salad is called "macedonia", it is for a reason, really: because at the beginning of the 20th century the region was a true "salad" of many different ethnicities (Greeks, Bulgaro-Macedonians, Albanians, Turks, Jews...). Diversity that has been destroyed specially in the Greek part.

We all can make a difference easily betwen the Republic of Macedonia and the Greek region of Macedonia (there are smaller portions that belong to Bulgaria and Albania too). We all know that Alexander was Greek. The rest is just petty quasi-proverbial Balcanic ultra-nationalism.

That's just my opinion anyhow. But most people outside Greece seems to find the Greek pretense just annoying. Even in Greek Macedonia I found many people who found it ridiculously exaggerated. Surely the far right elements of both countries will always make that kind of exaggerated claims and grunts but I think the common people should be more relaxed and natural about such things.

Thanks for your coment anyhow.