Honduran President, Manuel "Mel" Zelaya returned to Honduras via Nicaragua yesterday where he was welcomed by thousands of Hondurean citizens but also by a very strong military display, that attacked the people and eventually caused Zelaya's return to Nicaragua, as he declared he did not want to be "cause of violence". 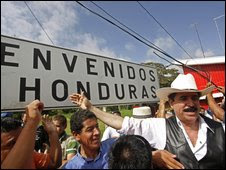 The situation is still confuse and it is possible that the army has murdered citizens again, as the troops used live fire, injuring several.

Meanwhile the situation in Honduras is turning into a popular revolution, as reported by local journalist Oswaldo Martínez to Gara:

After 24 days resistence is permanent. This is something unpredent in the history of the country. I am a block away from a barricade placed at the very center of San Pedro Sula, the industrial capital of the country. Resistence is very strong and organized. We have reports that the people has breached several military checkpoints. Road blockades begin at 9:00 and do not end till the night. There is a determined class war. This can't be stopped.

Yesterday was the second day of general strike in support for the President, that has been ranked as "a success" by the president of the Unitary Workers' Confederation of Honduras, Juan Barahona. The main harbours were completely blocked and the roads leading to Tegucigalpa were blocked for hours as well. Several emblematic buildings have been occupied by demonstrators as well.

For Oswaldo Martínez, the coupists never expected such a reaction from the people. They got their calcualtions totally wrong.

I just watched at BBC International to US Secretary of State Hillary Clinton barking at Zelaya's attempt to restore legality and democracy in the Central American country. She said that he was being "reckless" and that he should abide by the already defunct plan of mediation by Costarrican President Oscar Arias, a loyal ally of the United States, according to Fidel Castro, who believes this mediation is nothing but a delaying tactic.

Obviously the USA is stepping out of their calculated ambiguity and becoming more expressly supportive of the coupists.


Update Jul 26: Pedro Magdiel Martínez, 23, supporter of the President, was found death with signs of torture near the border with Nicragua. According to neighbours he was arrested the day before accused of "smoking marihuana". Police denies that the arrested and the victim are the same person.

Zelaya remains at the border looking for another opportunity to cross into Honduras but it's not clear if tiredness may catch the supporters. Some apparently regretted bitterly that he did not continue into the heart of the country when he had the chance