Neanderthals extinct by competition, not climate

Tim (remote central) points me to a study by Banks, d'Errico and colleagues that reviews the hypothesis suggesting that Neanderthals went extinct due to climatic constrain:

Despite a long history of investigation, considerable debate revolves around whether Neanderthals became extinct because of climate change or competition with anatomically modern humans (AMH).

We apply a new methodology integrating archaeological and chronological data with high-resolution paleoclimatic simulations to define eco-cultural niches associated with Neanderthal and AMH adaptive systems during alternating cold and mild phases of Marine Isotope Stage 3. Our results indicate that Neanderthals and AMH exploited similar niches, and may have continued to do so in the absence of contact.

The southerly contraction of Neanderthal range in southwestern Europe during Greenland Interstadial 8 was not due to climate change or a change in adaptation, but rather concurrent AMH geographic expansion appears to have produced competition that led to Neanderthal extinction.

Their modelling shows that in the warm and wet GI8 climatic period (c. 38-35,000 BP) Neanderthals could exploit nearly all Europe but in fact were restricted to parts of Iberia, as shown in this map: 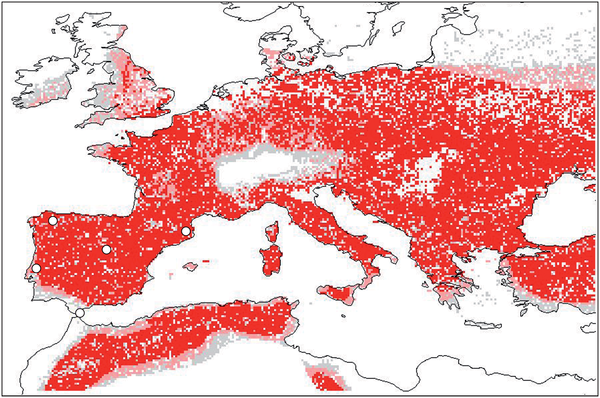 Reminds me of the justifications used by Europeans as they expanded through regions occupied by more 'primitive' humans, such as Australian Aborigines, Native Americans and New Zealand Maoris. Europeans outcompeted these people. So nothing has changed in 30,000 years.

Maybe you're right. But hunter-gatherers are not particularly belicose normally. Not sure how much of these generalizations can apply to actual UP people at that moment.

It's pretty clear that the AMH that arrived to Europe fed on a much more varied diet than Neanderthals, who apparently were enthusiast of big game. It's alos apparent that they were able to fight the much stronger Neanders because they used projectiles (reducing the risk of close combat).

Not sure, really. Sometimes I wonder if the Chatelperronians were really Neanderthals or we're just being confused by an archaeological accident. I find hard to explain the fast expansion of Aurignacian (less than 1000 years it seems, maybe just centuries) into a pretty dense Chatelperronian area, often using the same caves (what in general is considered sign of people's continuity). It'd be all easier to explain if the process took longer and Neanderthals were only gradually displaced and fragmented.

1. The bacterian shock alone has never completely destroyed any population I know of - anywhere. People suffer, many die, but they survive and recover... unless there are other factors like brutal exploitation, as in most of Iberoamerica, or right away democide, as in Angloamerica and probably the South Cone too.

2. AMHs and Neanderthals shared a frontier of some sort and probably even exchanged technology at some times (Ahmarian-Szletian-Chatelperronian connection, somehow leading to Gravettian later on). This probably happened all the time or at least since the westward colonizer wave departed from South Asia into West and Central Asia. The process was in most cases slow enough to allow biological adaptation by both sides.

I am more inclined to think that the cold H4 period (c. 40-38,000 BP) could have debilitated both human groups (the paper shows that their potential areas shrinked significatively) and after it, in the GI8 phase, AMHs just recovered very fast, while Neanderthals rather not (in fact they decayed even more).

But another possibility is indeed that AMHs were in fact colonizing Europe, including the West and the North since before Aurignacian. I'm right now a paper by Hoffecker (will write on it soon) that, while acknowledges Chatelperronian as of Neanderthal creation, dwells into the various MP-UP transitional techno-cultures, giving some light to a process that is both controversial and difficult to understand.

Also notice please that the H4 cold episode was caused by the Campanian CI eruption, that surely had a catastrophic impact in all peoples around the Mediterranean and is considered the largest volcanic catastrophe in this area in the last 150-200 kyrs.

Maybe it just means that some recovered better. Neanderthals would have done with more time maybe... but they apparently did not get that much needed truce.

"The recent dating of the CI eruption at 39.3 Ka BP draws attention to the coincidence be- tween this volcanic catastrophe and the suite of coeval biocultural modifications in Old World prehistory".

Thanks for that link Maju. I was not aware of any such eruption until now. Many years ago (late sixties/early seventies) my work involved mapping geological features in the central North Island. There ignimbrite eruptions have been quite common so I am well aware of their destructive nature.

And I think you're onto something with this:

"I am more inclined to think that the cold H4 period (c. 40-38,000 BP) could have debilitated both human groups (the paper shows that their potential areas shrinked significatively) and after it, in the GI8 phase, AMHs just recovered very fast, while Neanderthals rather not (in fact they decayed even more)".

Neanderthals were probably already a small gene pool and so the eruption would have increased inbreeding depression in the population. Modern humans, on the other hand, could be reinforced through inward migration from outside the region.

The problem could be as simple as that, Neanderthals ultimately died out through inbreeding.

Thanks for that link Maju. I was not aware of any such eruption until now.

Me neither. But seems to be the cause of the H4 cold period. It also seems to have sent pyroclastic flow (rocks!) as far as Ukraine (the CI tephra layer is mentioned in archeology of Kostenki), so must have been a really big one.

The problem could be as simple as that, Neanderthals ultimately died out through inbreeding.

It is part of the problem but you don't see isolated peoples "dying" of that (in some cases whole populations of animals have recovered from just a few individuals: inbreeding is not necesarily deadly) and anyhow it was the penetration of AMH what cut Nenaderthals from each other.

IDK, when did Neanderthals vanish from Gorham cave? More or less when Sapiens arrived (late Aurignacian).

And there's a curious story today at Mundo Neandertal: a Neanderthal old man from Sahnidar (Iraq) who died from a perforating injury. The authors argue for a projectile such as which H. sapiens could have used but it's speculative, and the datation of the specimen is too wide (75-50 kya). Would be close to the later date I'd smell the smoke of the gun but it's not even clear.

"in some cases whole populations of animals have recovered from just a few individuals: inbreeding is not necesarily deadly".

Usually is though. In the cases where 'whole populations of animals have recovered from just a few individuals' it's usually the case that the recovery has involved human interference in a breeding program. Extinction seems to be usually associated with the disruption of populations into small unviable populations. Certainly seems to be the case in this part of the world anyway.

However we know that modern humans had emerged into the Middle East by 90,000 kya so there could be an association here.

I'm not too well documented but with mostly lack of interference by humans (i.e. protecting the niche or the species itself), animals like morsels or sea otters have recovered alone starting from really really low populations, AFAIK. Nenadethals did not have, of course, the status of protected species back then...

However we know that modern humans had emerged into the Middle East by 90,000 kya so there could be an association here.

Well, it would seem rather to relate, if anything, to the wave from South Asia that would have begun maybe c. 50-55 kya. It really seems to require the lowest of the possible dates, though it's also true that we have too few data on the Eastern West Asian province (Iran-Iraq) for the critical transitional period.

I'm anyhow starting to believe the story because the injury seems caused by a projectile such as a javelin in marked descending trajectory (low energy and momentum, 45 degrees inclination downwards), what fits well with a hurled missile and not anything else we can think of.