Something that seems pretty obvious is that Guandong Chinese (Han) cluster apart from Northern Chinese (Han) and together with SE populations (Tai-Kadai and Mon-Khmer). However there is no absolute divide and depending on the method of analysis used populations cluster somewhat differently.

The most divergent groups are Tajiks (no surprise here) and the Drung a small Tibeto-Burman nation from Yunnan.


I never really got to review this paper properly but at the very least I must include here fig. 3: 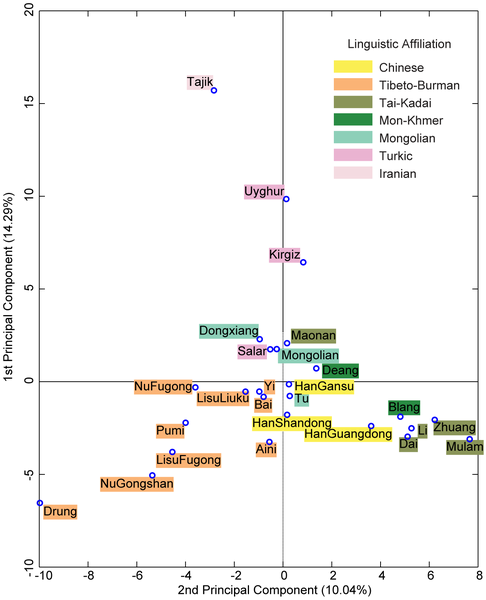 ... which illustrate how Southern Han from Guangdong cluster with other SE Asians (specially Daic peoples) and not Northern Han (nor Tibeto-Burman, nor Mongol). Even more clearly than some other Southern ethnicities.
Posted by Maju at 12:24 AM

Interesting link. From the paper:

So, to fit with your previous comments concerning the region (and SE Asia) this movement would have carried no Y-chromosome haplogroups south. And:

But even the Mon-Khmer and Tai-Kadai languages could be distantly related to the Sino-Tibetan languages, and also have their ultimate origin north of the region in which they're now found.

The supposed northern origin of TB speakers is not new to me. However we'd have to see what archaeology has to say in this regard.

"this movement would have carried no Y-chromosome haplogroups south"

What do you think? I don't think this hypothetical migration can explain Tibetan D1. If for real, it may well have been more of a cultural than a demic movement.

This seems the kind of simplistic recentist explanation such as "J1 is Semitic", "R1 is Indoeuropean" and "O3 is Han"

The rest is also the same. Thanks for bringing those simplistic issues to the table. Because claiming linguistic conclusions from genetic data, as they do is far fetched, unprofessional.

I really only looked at the data and then I forgot. The data (fig. 4) seems to say that there are three tightly intermingled groups autosomal clusters in the state of China: one that could be considered Western Eurasian (highest among Tajiks) and that does permeate through the steppary region, another that we could call Tibeto-Burman that reaches its peak in Yunnan and yet another that we could call "general mainland East Asia" that is highest among diverse populations (Southern Han, Tai-Kadai, Hmong-Mien).

But the K graph may well be misleading because they mostly sampled Yunnanese TB peoples, biasing the results in that direction (sample size does matter) and never reached beyond K=4.

I wouldn't rush to any conclusions only from this data and certainly not from the opinions stated in the text.