The authors explore the differences between actual lactase persistence phenotypes, i.e. the real apportions of adults who can digest milk, and the presence of alleles thought to cause this phenotype. They find that in many parts of the world, notably SE Europe, West Asia and most of Africa, the number of actual milk drinkers is often very different than known genetics could predict. 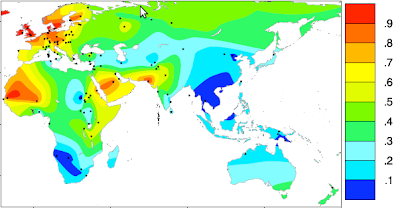 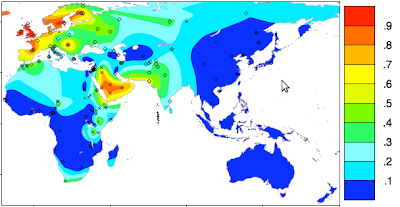 I call that "evolutionary convergence" but the same idea.

Yes, that's what the paper says (you can check yourself: table 1). It's not the only case where genetic predictions are larger than actual phenotype frequency but it is one with the largest difference. Another quite striking one are hungarians (predicted: 86%, actual 56%). There are a few others (Iranians, Indians, Irish, North Italians) but the differences are smaller.

A visitor to Mauritania recently commented to me on its endless flat sandy terrain and the goats. LP there would of necessity be derived from their milk.

Mauritania scores rather high in actual LP phenotype (although the point samples are from the Wolof, not the Arabs) but the alleles involved are a mystery to date. The closest Arab sample is in Tunisia and it scores very low instead.