The oldest map of Western Europe

The oldest map of Western Europe has 13,660 years (C14) and represents the area of Arraitz in Northern Navarre.

It was engraved in a rock block by people of Magdalenian culture and has now been deciphered as such map, representing the local streams, mountains and some circles that probably represent areas which became swamps seasonally. 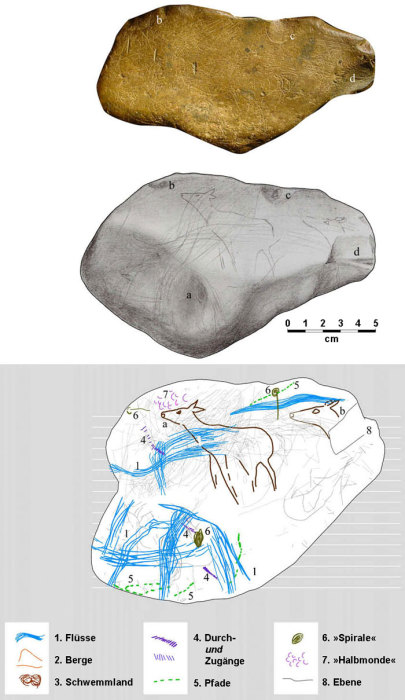 The rock map, a drawing of it and an interpretation with legend in German
The cave in which it was found is Abauntz Lamizulo, literally the hole of the lamias (mythological bird-footed nymphs) of Abauntz. It is rather to the south of the Magdalenian exploited area what may mean they used it seasonally or even just some good years, hence the importance of keeping a record of the geography, I guess.

The map also shows an engraved female deer and a deer head. Another block has an engraved horse head. These two blocks, property now of the Museum of Navarre, have bee temporarily ceded to the University of Zaragoza for their study.

In all Europe there are only two older known maps: these were found in Moravia engraved in bone.

The cave of Abauntz Lamizulo was surely a strategical location for Magdalenian hunter-gatherers. It discretly dominates the canyon under it, which the animals that lived in the rich valley of Zaldazain, like the now extinct aurochs, had to cross necessarily.

"Gorri" means "red", "ohol" is avariation of "odol": blood, etc. It's one of those horrible lists of selected words with sound coincidence and with attributed meanings that in many cases have nothing to do with reality.

I suggest that you delete that nonsense on risk of making a fool of yourself, seriously.

There may be some toponyms and even some regular words of Southern Slavic that are very interesting nevertheless but must correspond, if anything to a very old substrate. For example gora in Basque means up, upwards (also used like "viva") and has a clear Basque structure (goi-ra: to the high) and gore in South Slavic means up too, while gora is mountain. The river Iber of Kosova/Serbia and Hebros of Bulgaria/Greece also seem to relate to the river Iber/Iberus (Ebro), always understood to derive from Basque ibar (river bank) and this one from ibai (river), from the same ib- root as ibil (to walk).

But many of the words posted in that list do not exist at all. To begin with Basque does not have the letter C, much less the accented C shown in so many words, showing that the author has just a very shallow idea of Basque: -sko is a an archaic diminutive attested at least in Aquitanian as well as some pervivences, like the surname Belasko (Velasco), originally a name meaning little crow (cf. Bela, Vela: crow, also a Medieval Basque name that has passed to Iberian romances as surname). This is preserved in some words as -ska: sardeska = eating fork < sarda = pitchfork.

no archeological artefacts from slavs...

I do not know for Basques,but against Macedonians is a great propaganda.
Macedonians are “Greeks”,but…
http://www.monumenta.org/article.php?IssueID=4&lang=en&CategoryID=3&ArticleID=268
Mani is one step from Athena

Relax. You cannot go that fast and carelessly: gorri is red but fire is su and flame is gar. If you are not minimally strict you end up with panels like the one you published (I have seen other lists of that kind, relating supposedly Basque and Berber, Basque and Ainu, Basque and whatever else...) and they are just careless lists of more or less resembling sounds, often with totally unrelated meaniungs. That is not valid from any scientific viewpoint, specially if you realize that sound coincidences are normal. Even a handful of sound-meaning coincidences are statistically possible between unrelated languages. And it's easier the looser your criteria for sound and meaning correlation, of course.

For example Belial is much more likely Canaanite: Baal=Lord in Phoenician, El/Al=God in Hebrew/Arabic. It could well mean "God is Lord" or whatever.

The closest cognate of beltz (black, archaic/toponymic: bel) I can think of is English black. In official theory it derives from IE words for white like Lat. blancus, but I make no sense of that at all.

Now, please do not come to me with idiotic slavic nationalist propaganda ideas. E-V13 is clearly Neolithic and reflects very well the pattern of spread of Balcanic Neolithic through the Vardar-Morava-Danub axis. E-V13 is also unusually common in West Iberia and even in some locations of Wales, where no Ottoman influence ever reached, while it is relatively rare in Turkey. It is a clear Neolithic founder effect associated mainly to Balcanic Neolithic but with a branch reaching the Atlantic probably via Cardium Pottery.

Albanian is the oldest living separate IE branch. I doubt it's Illyrian but could well be Thracian or even Pelasgian if those peoples would speak IE at some point (probably not).

Sorry to interject here. But Albanian is NOT the oldest branch of Indo-European.

As a matter of correctness, Albanian is not a branch at all. It is an isolate. It stands alone within the IE family of languages, having no close relatives (but a rich inventory of borrowed Latin words).

The closest languages to reconstructed PIE (Proto-Indo-European) are the Baltic languages, Lithuanian and Latvian and the extinct Prussian language (not to be confused with the former region of Germany, East Prussia).

As a matter of correctness, Albanian is not a branch at all. It is an isolate. It stands alone within the IE family of languages, having no close relatives.

That is a branch on its own right, because even if it has no "close relatives" it does have relatives (all IE languages). Hence it is not an isolate, even if you could want to use the term in a loose sense but after due contextualization.

In any case it is a branch of Indoeuropean exactly the same as Tocharian, Western IE, Indo-Aryan, Hittite, Greek, etc.