Here there is a refinement and expansion of my previous post on the matter.

I have now analyzed DE, C, IJ and NO structure too. The result is as follows: 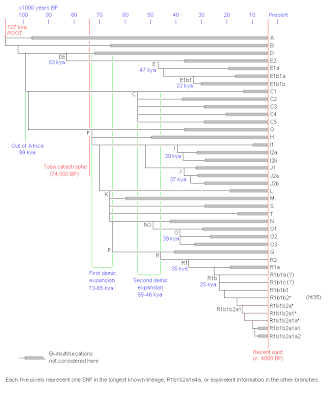 Please compare with climatic data for possible fine tuning (my first impression is that it fits reasonably well but that minor corrections may be done too).

So let's see how it did man's history (man to be taken literally: human male lineages are the only ones considered here).

The so called "Y-DNA Adam", i.e. the common ancestor by pure father-son line of all living humans may have lived some 107,000 years ago. Humankind is of course much older, possibly double that figure, but "Mr. Adam" seems to have lived much later, soon before the out-of-Africa epysode.

The C,F line split c. 99,000 years ago. This lineage is clearly of Eurasian coalescence: all derived lineages in Africa (not many) represent back-migrations at much later dates. Hence the main migration out of Africa must have happened then. At similar dates we also have the oldest AMH remains in North Africa (Aterian) and West Asia. Some South Asian indirect evidence might also point to AMH presence at those dates, though this is arguable.

Significatively, the third Eurasian lineage, D, may have been at that time still in Africa. This is intriguing, as it suggests a second migration for this lineage alone at a later time, maybe 83,000 years ago.

In Africa, at similar dates to those of the C,F migrating adventure, we witness the expansion of haplogroup A, which is widely spread from Sudan to South Africa. This may signal that the C,F migration happened within the context of an Eastern African expansion. C,F would then have been the ones migrating to the North, to the Mediterranean coasts and beyond into Asia.

We know with great certainty that some 74,000 years ago, Toba caldera (Sumatra) exploded, causing a major catstrophe in Asia and a sharp freeze around the globe. We also know that populations in India (Jawalpuram culture) survived the catastrophe. The Eurasian humankind probably experienced a bottleneck and then an expansion after this epysode. It is only logical to date this first expansion (the rapid succesive branching of F, IJK, K and NOP nodes) soon after Toba therefore.

This expansion was limited anyhow, as we witness a rather long period of latency after it (65-55,000 BP). It is likely though that the major proto-lineages were distributed as follows:
Notice that none of these lineages (excepted M) would expand for at least other 10,000 years, in some cases (L, T) for even a much longer period, so there is a lot of uncertainty about their actual locations at this stage. In all that parenthesis, a lot of drift and fixation may have happened in the different populations.

But the overall distribution of these clades does indeed suggest that there was some spread to the East (4-5 clades) and West (3-4 clades) of the probable South Asian homeland (2-4 clades) already. Another possibility would be that all clades were restricted to some geographical province like South Asia.

This is probably the main real expansion, and one for which we do have some clear fossil evidence. I have estimated it to have taken place between c. 55-46,000 years ago and would have certainly pushed humankind all around Asia and continental Oceania.

At this phase:
In Africa also, E split into E1 and E2 at this timeframe, with E1 branching out soon after.

The later expansive trend seems to have no clear bounds. We can point some moments though:

5.1. The great North: The first branching of the two major clades of the great Eurasian North: N and Q (C3 would seem to have a later timeframe) happened before 40,000 years ago, it seems.

The somewhat controversial haplogroup R, extended by Europe, Central and South Asia mostly, may have split c. 35,000 years ago. This can be considered as the origin of South Asian R2, which seems to be an old clade in the subcontinent.

R1 appears to have divided c. 27,000 years ago, which probably meant that proto-R1b migrated out of South Asia (or maybe Central Asia) about that time, while proto-R1a remained behind. Destination? Almost without doubt West Asia. There is a serious possibility that it could have taken part in the Gravettian expansion in Europe, which began c. 28,000 BP. Its parallels with confirmed Gravettian mtDNA H do suggest it (but this is somewhat controversial).

Some 19,000 years ago R1a started evolving into R1a1, which may mean a migration between Central and South Asia, though the exact direction is at this moment unclear. Roughly, R1a1 was formed by c. 17,000 BP, R1a1a by 13-12,000 BP and the various subclades (R1a1a3 as prototype) could be as recent as c. 6000 BP, what fits almost perfectly with the Kurgan model of Indo-European expansion.

R1b1b2a apparently c. 16,000 years ago, while Western European typical R1b1b2a1 would have been formed c. 14,000 BP and derived R1b1b2a1a by c. 13,000 BP. These latter dates fit too well with the time of Magdalenian expansion to Central Europe (and later to southern Iberia) to be ignored.

The relatively rare R1b1b2a1a subclades would have begun appearing c. 9,000 BP, what would mean limited Epipaleolithic and maybe even Neolithic local founder effects. Notice please that these subhaplogroups include only a small apportion of all R1b1b2a1, even if some of them have some localized relevance.

If European R1b is not of Gravettian origin, it would require a migration from West Asia at the foundation of Magdalenian culture, some 17,000 years ago. This is not what archaeology tells us: it says that Magdalenian was a local Aquitanian developement, maybe influenced by Aurignacian remnants of Central Europe (Magdalenian and Aurignacian are very similar). So I remain inclined to think that R1b arrived to Europe with Gravettian, drifting massively with the Late Glacial Maximum, what virtually erased all other Y-DNA lineages, be them R1b or I2 or whatever else. Then, as generally accepted, R1b1b2a expanded into Central Europe and Iberia with the Magdalenian expansion and later, in the Epipaleolithic, into Scandinavia and the Atlantic Islands.

I am anyhow intrigued more and more about the exact nature of SW European I, which has not been properly tested for the most part. Some of it is clearly I2a that arrived with Neolithic expansions from the Western Balcans but the rest is just I* as of today.

For the parallel mtDNA possible timelines, see these posts: 1, 2, 3.

It's noticeable that with a similar SNP-based method I also detected two apparent expansive pulses in the mtDNA timeline, separated by a "valley" of limited growth. The overall pattern would be the same:

1. First Expansion
2. Pause
3. Second Expansion
4. Aftermath of regionalized and rather continued expansion, which included the first colonizations of Europe and the Eurasian North
.

and the various subclades (R1a1a3 as prototype) could be as recent as c. 6000 BP, what fits almost perfectly with the Kurgan model of Indo-European expansion.

Any idea the percentage R1a1a3 in India. I don't remember reading in any studies. Is this just a laboratory clade or used by the population geneticists?

No, sorry. At this moment I haven't read much on the various low tier subclades of R1a. I know that South Asia has some minority distinct clades that seem closer to the root. But this is only via the haplotype comparison. Typically these haplotype clusters eventually happen to correspond with haplogroups but will take some time to clarify the matter probably.

Still the intermdiate part of the haplotype "tree" was Central/West Eurasian (can't find the graph, sorry). So it may well mean that while R1a coalesced in South Asia, it only really "exploded" from a derived group in Easternmost Europe, once pretty marginal: the early Indoeuropeans.

Is this just a laboratory clade or used by the population geneticists?

By YSOGG, there are five subclades of R1a1a. Three are considered "private" (very few cases detected but the SNP is there anyhow) and two are considered normal (R1a1a3 and R1a1a4). I took R1a1a3 because it has more known definitory SNPs.

Anyhow I think that it's more interesting to locate R1a*, R1a1* and R1a1a*, i.e. those people that hang from diverse parts of the tree, closer or farther from the root, farther or closer to the main subclade (R1a1a). It is very likely that the South Asian R1a close to the root are R1a* and not R1a1.

"There's another subclade (C6) whose geography has not been reported".

I've written on my copy of the Y-hap C diagram that C6 is found in New Guinea. I must have got that information from somewhere but I can't remember where.