The bantustanization of Palestine

The term Apartheid sounds more and more in relation with Israel and its occupation of the formally unannexed areas of Palestine. One of the central elements of South African Apartheid was the bantustan, micro-states carved out in South African territory, often discontiguous, with no real competences in foreign or even internal policies, created basically to deprive South African Blacks from their citizenship, making the country a little more white and little less black on paper. 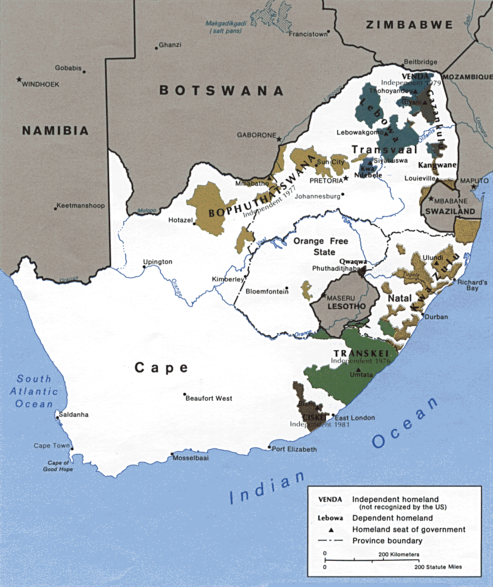 South African bantustans in the 1970s and later
The situation is strikingly similar in Palestine, as this Quaker video shows:

There's no two states solution largely because Israel doesn't want it. The term is only waved as support for the creation of a Palestinian bantustan and nothing else.

Exactly. The problem is summed up in a saying doing the rounds here many years ago. It went, "Israel just wants peace: a piece of Jordan, a piece of Syria, a piece of Lebanon and a piece of Egypt". In fact Jewish fundamentalists, who have a disproportionate influence in Israeli (and American) politics, have an even broader agenda. They claim that God gave Abraham all the land between the two rivers: the Nile and the Euphrates. And they aim to eventually claim all that territory.

That's why I believe it's absolutely important that we destroy this ridiculous belief in the literal interpretation of the Old Testament. Especially the belief in an Abraham. In fact that is the fundamental thrust of the series of essays Tim has posted on remotecentral. Of course the essays can be greatly improved, but their basic premises are correct.

Fuly agree here: I cannot understand how modern literate people still give any importance to ancient mythology. Mythology is interesting from an anthropological or even historical viewpoint but taking it as some sort of super-scientific truth is just absurd.

It's clear that Judaism was extremely succesful in the expansion of their pseudo-monotheistic doctrine and both Christianism and Islam (as well as Judaism itself) are the proof. Personally I feel only disdain for such a hyper-patriarchal foreign doctrine, the root of many evils, of which Israel is just one.

Instead I fuse Spinozian Pantheism with authoctonous Basque "yin-yang" Monotheism (and a pinch of salt, always good) and that works for me rather well. So for me all that's in the Bible is nothing but superstitions, Hebrew ethnic cultural documents and repulsive ultra-violent patriarchal ideology.

"I cannot understand how modern literate people still give any importance to ancient mythology".

Because politically, economically and socially it suits many influential people to keep the myths alive. A series of ancient, local, tribal feuds have been exported to the rest of the world.

Yah but I'm talking of the non-influential people, not the vampire elite.

Those people are literate, their IQ seems to have been growing throgh generations. They obvoiusly know the difference between reality and Santa Claus but can't discern when Santa s called Yaveh instead.

And well, I can understand the emotional role played by an imagnary parent/friend/master and the social role of temples where the majority is still religious, and the philosophical need to explain the origin of reality somehow...

But taking the Genesis to the letter is pathetic, hilarious, making a fool of oneself. Please!

A lot of money is poured into making "the non-influential people" believe what "the vampire elite" wants them to believe.

And, as you say, even for the literate mob "the emotional role played by an imagnary parent/friend/master and the social role of temples where the majority is still religious, and the philosophical need to explain the origin of reality somehow" is an important consideration.

But let's not assume that all those who claim to believe in a literal interpretation of Genesis actually do believe it. There's a good book out by an Australian (Plimer, I think his name is) called "Telling Lies for God". His argument is that many who push the literal line don't actually believe it. They have an agenda.

...many who push the literal line don't actually believe it. They have an agenda.

Yah, obviously. Most "religious" leaders are mere liars in search of power.

But still I am seriously concerned on how the common people fall to such lies. I am most seriously concerned about the state of human intelligence, sincerely. I fear that, after the great advances of the Paleolithic, since civilization took root among us, we are more and more becoming like ants, where intelligence ony matters as long as it's functional but not if critical. Of course there are exceptions (illustrated periods, where critical thought is favored) but the trend is clearly totalitarian towards a more stupid humankind, smart enough to manage programs or bots but also stupid enough to take the Bible or the Quran word by word.

"I am most seriously concerned about the state of human intelligence, sincerely".

I was certainly under the impression that you believed that human intelligence was the driving force behind the human large brain size. Although I notice you 'believe' that this increase was confined to the Paleolithic.

Well, Neaderthals had brains way larger than our modern average and it's been said the same of Crô-Magnons, though I'm not sure if this last has been confirmed.

It's not impossible at all that, the same that domestication reduced the brains of dogs, smaller than those of wolves, civilization has had a negative impact on our intelligence, or at least some aspects of it, favoring the functional but submissive type you can find filing the banks of any Engineering college over critical thought and creativity. This is not necesarily a biological process anyhow but I have little doubt that it's real.

It's the same that capitalism is killing cooperative behaviour and solidarity, maybe it's just a cultural evolution but it's happening anyhow.

Not sure how it actually works but it's clear that social pressures favor some types of intelligence over others and that conformism and lack of cricticism is always favored in any hierarchical organization.

It's dialectic, even evolutioanry dialectic happening before our noses, in our own lifes.

Guess that the philosopher, or more properly the free thinker, has the advantage of being more full, more genuine, able to reach to a comprehension that the system just can't. Also history shows that the excessively repressive systems, quickly fall to their own stagnation and corruption. That's why only the more open, "democratic" to some extent, systems acually suceed in the long run: because they can recieve some real feedback and adapt accordingly.

But I'm extending myself too much.