After centuries of disrespect, land robbery and forced assimilation the descendants of the ancient Jomon people (the first known to work pottery anywhere, in spite of being hunter-gatherers) will be finally been acknowledged a status as indigenous group today by the Japanese Parliament.

The Ainu, descendants of the epipaleolithic Jomon culture dwelt once in all or nearly all Japan but were displaced by the agriculturalist Yayoi invaders beginning c. 500 BCE, who migrated probably from coastal China (Jiangsu province). In the following centuries they were displaced further and further northwards until the rather unhospitable island of Honsu became their last refuge. 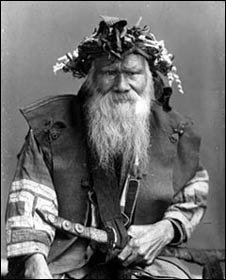 An Ainu elder from the times of B&W photography
Japan has a centralist nationalist tradition and had so far declined to accept the existence of the Ainu as a separate ethnicity. They even called them "former aborigines", suggesting that assimilaton was the only way to go. Japan has also another ethnic minority in the south: the Ryukyuans, whose language is akin to Japanese (Japonic family) but different.

The new legal recognition comes as response of growing Ainu activism and ethnic pride in the last decades. It is so far only of symbolic value but should be the basic legal frame that may allow the administration to develope further measures in the future. Time will say but is at least a step forward.

The Ainu traditionally did not have knowledge of pottery. Your claim that they are "descendants of the Jomon people, who were some of the first people to make pottery despite their pre-Neolithic lifestyle" makes no sense.

Ebizur. So-called Joman pottery is the oldest in the world and so pottery could well have been invented in Japan. Pottery first appeared in there about 12,000 years ago. If the Joman people were not the ones who made then who was? It's obviously possible to have "pre-pottery Neolithic" as well as "non-Neolithic pottery".

Terry said it all (thanks). It's speculated that they had a semi-sedentary lifestyle based on fishing. The case is that the Jomon culture made pottery without knowing of agriculture. They even had very elaborate designs in later phases, just browe "Jomon period" in Wikipedia or follow the link in the post.

Anecdotically, there's at least another case of even older "pottery" but not used as pots in this case. Some Gravettian culture people of the Czech Republic (can't recall the site right now but it's a major one) made some terra-cotta (baked earth) "idols" and willingly caused their fracture in the oven. As the beahviour is attested for a long period, it's understood it was no error, but that they did it for some religious or ludic reason, as sort of primitive fireworks, maybe with a magic purpose.

You guys have totally missed the point of my comment.

I stated that "the Ainu traditionally did not have knowledge of pottery."

Unless you can disprove this statement, your discourses are irrelevant.

Well, I have not seen proof of what you say is true either, Ebizur.

The Wiki says: The origins of the Ainu have not been fully determined. They have often been considered Jōmon-jin, natives to Japan from the Jōmon period. Recent DNA research says that they are descended from the ancient Jomon people of Japan.

In the Smithsonian Institute's page on the Ainu (http://www.mnh.si.edu/arctic/ainu/html/room01.html), you can read:

" Ainu origins have been investigated archeologically for many years, and we have a few materials here that represent some of the precursors to Ainu culture including Jomon materials which is one of the old cultures of Japan seen here and some Okhotsk culture materials in the next case. It's a very spiritual culture and these spiritual features of the art are expressed in pottery and bone and wood.

I don't know why you seem to disagree with this general aknowledgement of Ainu as descendants of the Jomon but, in any case, I understand it's up to you to present evidence of the opposite.

I often disagree with Maju but I'm totally on his side on this one. In fact I'd go as far as to suggest that pottery in the west resulted from expansion from around the Sea of Japan. And pottery in Japan had probably resulted from some sort of "Gravettian" influence earlier from Central Europe.

Separate multiple invention is certainly a possibility too. I wouldn't go so fast when attributing distant influences of I could end arguing that Sumerians invented the Olmec civilization... via Caral. There are simpler explanations and I will in general abide to them.

But the various expansions in various directions in this case are interestingly coincidental.

I'm not talking about peoples whose archaeologically described traces have been collectively labeled as "Jomon culture," but rather the historical ethnic group known as the "Ainu." They did not have a ceramic tradition, and they lack native words for ceramics in their language.

What is the basis for associating the Ainu with "some of the earliest makers of pottery" if the historically attested culture of the Ainu is aceramic?

That they are generally acknowledged as descendant of the Jomon culture.

I have yet to read anyhow a single line, other than your words on Ainu being "aceramic". Maybe Hokkaido Ainus were (hunch) but not so long ago they still occupied about half of Honshu too. Are you telling me that not a single piece of Jomon pottery has been found either in northern Honshu?

AFAIK once they lived in all Japan. That's what I find everywhere I look. So can you document your objections at least?

I wonder why you're so aggresive on this issue and why you insist so much without presenting any evidence to back your eccentric hypothesis.

And it's quite possible for a people to lose the knowledge of pottery. The Polynesians lost it during their trip across the Pacific, possibly through lack of suitable clay. But cultural disruption could also cause loss.