Basque internationalist organization Askapena (Basque for Freedom) has joined the Palestianian and calls for a boycott to Israel focused in cultural areas, together with other internationalist groups. Some of the organizations asked to be actively boycotted by the platform IsraeliBoikot are:

- The Israeli sport teams, notably Maccabi Tel Aviv, whose presence is normally accompanied by massive police deployements, including Israeli agents, are in the focus of this campaign. Israel is not, in any case, any European country and should not play in European competitions. In fact it should be boycotted from all international sport competitions due to its racist policies.
- Dance groups such as Mayumana, which are accused of being propaganda tools of the Zioist occupation regime to give a false image of normality around the World.

In this they join a wider campaign promoted by Palestinian themselves who have asked for cultural and academic boycott to Israel. The reasons are obvious: it is a colonial occupation regime, that is excuting a long term planned genocide against the Palestinian natives. Israel is a racist state only for Jews, the vast majority of which have arrived from foreign lands as colonists in the last 60 years, taking the lands and country of the natives. These policies have not changed a bit in the recent past and Israel is still the most racist state all around the world, a colonial aberration that cannot be accepted as "normal", the same that Apartheid South Africa wasn't. 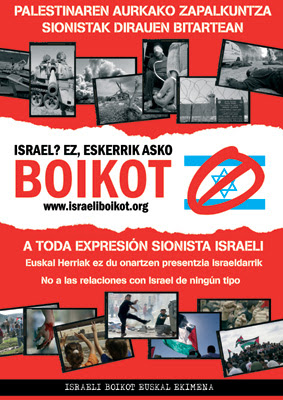 References:
- israeliboikot.org (in Basque and Spanish)
- Palestinian Campaign for the Academic and Cultural Boycott to Israel (in English and Arabic)

I agree. Good on you. It's certainly a racist state and yet there is no way anyone is allowed to say that out loud. Even many Israelis agree so the idea can hardly be called "anti-Semitic".

The "antisemitic" tag has been (and still is) sooooo abused by Zionists that has lost all value. For me the modern antisemitic ones are (among others maybe) Zionists, who practice racism and genocide against another Semitic people: Palestinian Arabs.