Something to ponder (genetics)

Soon I noticed that the two axis aren't proportional: first the distance marks of the PC2 (horizontal) axis are 250% larger than those of the PC1 (vertical) axis. Also the fact that the PC1 represents 52% of the genome and the PC2 only 28% introduces another large distortion. The horizontal axis should be a lot shorter (or the vertical axis a lot larger) for the representation to be realistic. So I corrected it: 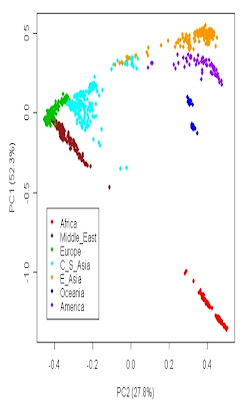 I know it's not very pretty but it actually represents more accurately the genetic distances - and you can check for the details in the original above. As you can see I also added concentric rings, centered in the two African dots (representing real people) that are closest to the Eurasian samples.

After doing that, it seems apparent that East Asians and Native Americans are more distant genetically from the common African origins than West Eurasians, South Asians and the natives of Oceania. Do not try doing that in the original graph because the distortion of axis makes East Asians actually appear closer to Africans and Europeans the more distant - but it's just an effect of that convenient (but misleading) distortion.

The greater separation of East Asians and Native Americans from the common African origin may be a function of distance but that alone should place Native Americans more distant and that's not the case. It is really something to think about and may be related to the unique circumstances of East Asian paleodemographics, that seem to involve greater bottlenecks than the rest and a large Neolithic colonization possibly. In any case something to ponder.